IRAN. HOC PRESENTS THE DOSSIER 'FACES OF REPRESSION' FOR AN UPDATE OF THE EU LIST OF PERSONS SUBJECTED TO RESTRICTIVE MEASURES FOR SERIOUS VIOLATIONS OF HUMAN RIGHTS 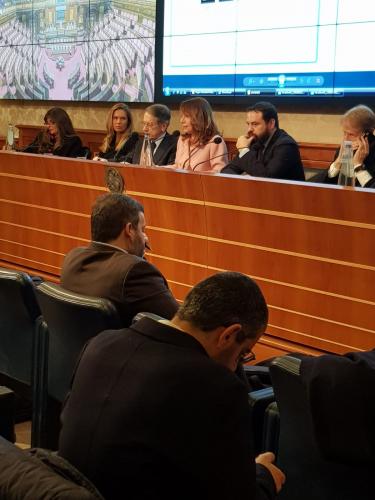 The dossier "The faces of repression" by Hands Off Cain - Spes contra spem presented today (13 February 2020) to the Senate outlines the profiles of 23 exponents of the Iranian regime that the association asks to be included in the EU list of persons subjected to restrictive measures because of serious human rights violations. There are currently 82 Iranian subjects included in this list. The list vetoes the issuing of visas and the freezing of their economic or financial assets, and must be updated by April 13, 2020.
For Elisabetta Zamparutti, treasurer of Hands Off Cain, "the inclusion in the EU list of subjects that we indicate in the dossier is a nonviolent way to express solidarity with the Iranian people oppressed for 40 years by the regime, to avoid Europe's complicity with that regime, and to demonstrate consistency with the principles of the rule of law and respect for human rights that Europe says it believes in. "
#Bisharaf, which in Persian means shame, is the slogan shouted by the anti-regime protesters in Iran which inspired the hashtag printed on the bracelets distributed to the participants in the press conference to criticize not only the Iranian regime but also a Europe too prone to compliance policy. Europe's compliance, said Ambassador Giulio Maria Terzi, is also demonstrated by the recent trip by the EU High Representative for Foreign Policy J. Borrell.
But the 23 profiles are also a demonstration that Iran is the problem of the Middle Eastern crisis, and that as such it cannot be the solution. They range from Ebrahim Raisi, Head of the Judiciary, who in the course of his career has accused, detained, tortured and executed many prisoners after having been part, together with Mostafa Pourmohammadi who is now his adviser, of the "Death Commission" which, in 1988, organized and carried out the massacre of at least 30,000 political prisoners, as Mahmoud Hakamian of the Iranian Resistance recalled.
There is the Minister of Intelligence Mahmoud Alavi, who is among the proponents of the repression of the anti-regime protests in November 2019 who recognized before the parliament that the regime resorted to torture and measures aimed at obtaining forced confessions to be transmitted later in television. And then the young Minister of Information and Communication Technologies, the thirty-year-old Mohammad-Javad Azari Jahromi, who played a decisive role in the campaign of repression, control and censorship that the Iranian government implemented during the uprising that began in November 2019 against activists by blocking Internet access for several days.
Finally, there is Hossein Ashtari, Chief of that police (LEF) who killed dozens of people and arrested thousands more, shooting in the crowd and beating protesters during the anti-regime riots. The LEF also runs unofficial detention centers, where torture and abuse are taking place, both physical and mental. The banners presented during the press conference are dedicated to them, images that Hands off Cain will now use in its social campaign.
For Sen. Lucio Malan, Iran's will to remove Israel from the geographical map is unacceptable, while for Sen. Roberto Rampi, adding these members of the regime to the EU list does not mean putting individual people on the index, but it means distancing from a bloody and oppressive system. For Laura Harth, representative of the Radical Party at the UN, it is urgent that Italy equips itself with an instrument such as the Magninsky Act, while for Elisabetta Rampelli, President of the Tribunal for Freedoms Marco Pannella, it is urgent that the true nature of the Iranian regime is known.