IRAN - Esmaili was wrong: Mousavi-Majd is not involved in general Soleimani's death 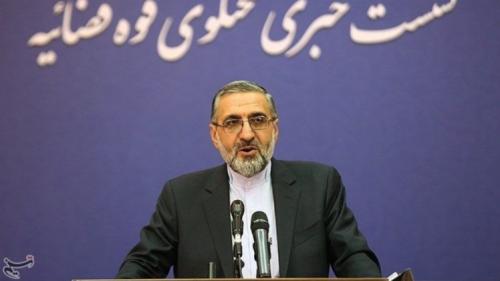 Hours after Iran's Judiciary spokesman announced on Tuesday that a "collaborator" has been sentenced to death for informing the CIA and Mossad about the whereabouts of Qassem Soleimani', Judiciary's media center said the spy case had nothing to do with Soleimani's targeted killing on January 3. In his weekly press briefing today, the spokesman Gholam-Hossein Esmaili said a collaborrator, Seyed Mahmoud Mousavi-Majd, who provided foreign intelligence services with details of Qods Force Commander Qassem Soleimani's movements, had been sentenced to death. According to the Judiciary spokesman, Branch 19 of the Supreme Court upheld the sentence which would soon be carried out. However, the Media Center of the Judiciary in a statement published by its mouthpiece Mizan Online website a few hours later, denied the spokesman's remarks. The statement said all stages of Mousavi-Majd's case and trial predated Soleimani's targeted killing in Iraq by the United States on January 3. According to the statement, Mousavi- Majd was arrested on October 10, 2018 and was sentenced to death on August 25, 2019 by Branch 15 of the Revolutionary Court. He was re-tried after the Supreme Court found the first trial faulty and was sentenced to death for a second time, which the Supreme Court has now endorsed. In a tweet after the Judiciary Spokesman's announcement this morning, Mehdi Keshtdar, the Managing Director of Mizan Online, said Mousavi-Majd had been in detention at the time of Soleimani's killing and could not have been responsible for informing on Soleimani's arrival at Baghdad airport. Keshtdar, however, said Mousavi-Majd had in the past informed the CIA of the "whereabouts and movements of military commanders such as Qassem Soleimani at various times".