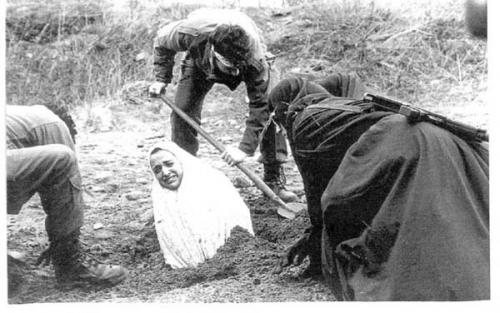 A stoning in Iran

Shirin Ebadi, a leading Iranian human rights lawyer and Nobel Laureate, said that the hardline Islamic regime was still using medieval punishments on its people, including the stoning of women for adultery and the torture of dissidents.
Ms Ebadi was one of just a few Iranians brave enough to speak out against the regime.
She had represented family members of murdered dissidents, women on death row for adultery, and writers accused of blaspheming the regime.
"At the moment some of the journalists and writers are in prison," she said.
"Two of my clients, because they expressed their opinions, they are in prison and they are now on a hunger strike. They are in bad physical condition and I am worried."
Ms Ebadi was particularly concerned about the treatment of women by the regime.
She cited the punishment metered out to women convicted of adultery.
"Unfortunately stoning exists in our law. According to the law, the punishment for adultery is to be stoned," she said.
"You bury the person up to their waist and then you throw small stones at them until they die. The stones should not be very big so that the person suffers before dying.
"I think this comes from the wrong interpretation of Islam."