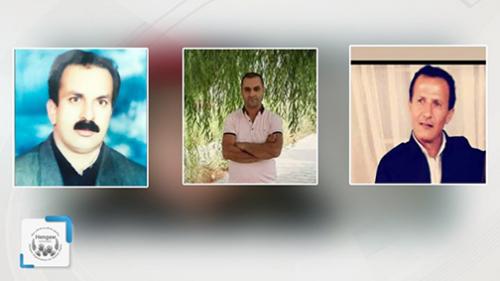 Ahad Habibvand (Nematvand), Sadegh Mohi (Mohemi), and Mohammad Karim Mahmoudi were executed on April 4 in Urmia Central Prison. These are the first executions of the Persian New Year, which began on March 20, with the celebration of the Nowruz.
According to a report received by Hengaw Human Rights Organization, in early morning of Sunday, April 4, 2021, the death sentences of 3 Kurdish prisoners sentenced for drug-related crimes were carried out in Urmia Central Prison. The identities of these 3 citizens are: Ahad Habibvand from Urmia, Mohammad Karim Mahmoudi from Oshnaviyeh, Sadegh Mohemi from Urmia. These 3 prisoners were transferred to solitary confinement in Urmia Prison yesterday, and their families visited them for the last time. Many families of the prisoners protested in front of Urmia Prison on Saturday after learning of the possible execution of their loved ones. In the following hours, IHR identified the names of two of the people who were not executed: the brothers Ebrahim Nasirzadeh and Mostafa Nasirkhah. At the time of writing, the three prisoners’ executions have not been reported domestic media or officials in Iran.