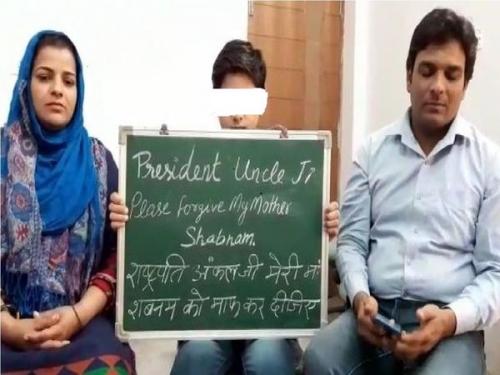 The son of a death row convict in Uttar Pradesh's Amroha on 18 February 2021 appealed to President Ram Nath Kovind to commute her death sentence, seeking "forgiveness" for his mother convicted of murdering her family in 2008.
"I love my mother. I am making an appeal to the President uncle, that her death sentence is commuted. It is up to the President to forgive her. But I have faith," Mohammed Taj was quoted as saying by news agency ANI.
According to the agency, Taj has been living with his custodian parent Usman Saifi in the Sushila Vihar colony in Bulandshahr.
Shabnam, a school teacher, and her lover Saleem were sentenced to death for sedating seven members of her family and slitting their throats on 14 April 2008. Among the dead was a 10-month-old child, who was strangled. Shabnam’s family was against her relationship with Saleem, a Class 6 dropout due to the difference in their social and economic status.
Shabnam and Saleem were arrested within days of the murders and were sentenced to death by the trial court in 2010, which was upheld by the Supreme Court in 2015. Their mercy plea was rejected by Rashtrapati Bhavan (Presidential Palace) and the Supreme Court also turned down their review petitions in January last year, saying that Salim had “meticulously executed the killing after Shabnam administered sleeping pills in tea”.
The death warrant about the date and time of hanging has not been issued by Amroha court. Authorities in jail in Mathura are preparing for the possibility she may be ordered to be hanged soon. Shabnam could be the first woman convict to be hanged after Independence if the death sentence is carried out as expected by jail officials.