HOC RECOMMENDS 'NO DEATH PENALTY: ESSAY ON THE HUMAN DIGNITY OF THE GUILTY' BY ALFREDO DE FRANCESCO 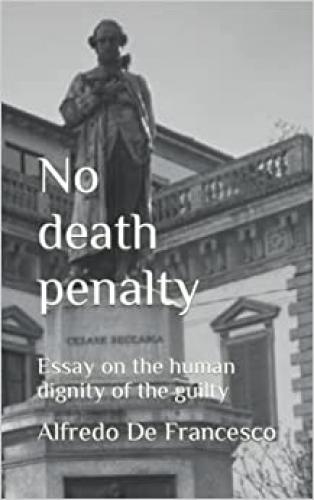 Hands off Cain recommends the essay entitled "NO DEATH PENALTY: ESSAY ON THE HUMAN DIGNITY OF THE GUILTY" by Alfredo De Francesco, English edition.
We read in the presentation of the book:
“Is the death penalty "natural" or sometimes legally due?
If not, is the death penalty always a political instrument?
If so, how and why can it be said that the death penalty is unjust, also considering religious values?
What about in case of war time or of very dangerous criminals?
In which way can there be an irrefutable argument for banning the death penalty worldwide and forever?
These and other issues concerning the death penalty are addressed by the Author of this book.
A book, where the most common theories for and against the death penalty are considered in the light of law history and philosophical views, and where, taking in account the constitutional basis of the criminal law sovereignty, Cesare Beccaria's approach is revised, taking into account the development of the contemporary criminal law and of the legal positivism.
This is an essay, where the protection of humanity is not considered simply as a hope or as a naive dream, but rather as a juridical concept, absolutely necessary to understand one of most tragic questions of all time: "is it just to kill those who killed?"
The book is available on Amazon.