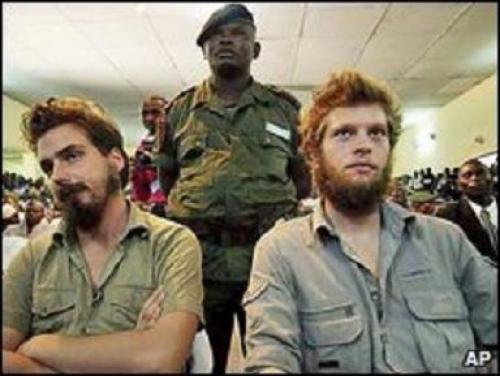 Tjostolv Moland (l) and Joshua French at the trial in Kisangani

a court in the Democratic Republic of Congo sentenced two Norwegians to death on charges of murder and espionage. The two men, former Norwegian soldiers, were convicted in May in the central Congolese city of Kisangani of murdering their driver and attempting to murder a witness. The court also convicted them of spying for Norway because they were carrying military ID cards at the time. Norwegian media identified the two as Tjostolv Moland, 28, and Joshua French, 27.
The court also ordered the Norwegian government to pay $70 million in damages. Moland and French were ordered to pay $171,000 to the driver's family.