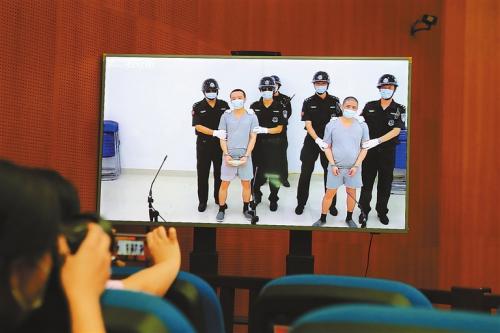 Two men who made and dealt drugs were sentenced to death on 23 June 2020 by Shenzhen Intermediate People’s Court, days ahead of International Day Against Drug Abuse and Illicit Trafficking (26 June).
The court sentenced Chen Haiyan and Chen Muzhong to death for manufacturing and selling narcotics and gave the other member of the group, Cai Bingxiao, life in prison, according to the verdict.
Court documents show that Chen Haiyan, an accomplice of a fugitive who is still on the run, rented a pig farm to make narcotics in June 2015.
In September, Cai transported the drugs from Luo-ding City in northwestern Guangdong to Chen Muzhong’s home in Shenzhen, and took the opportunity to sell some. Chen Muzhong drove to Lufeng City and took a deposit of 800,000 yuan (US$113,199) from a buyer.
Chen Muzhong and Chen Haiyan were caught Sept. 16, 2015 in Henggang, Longgang District, and police seized 65 parcels of drugs containing methamphetamine. Tests showed each 100 grams of the drug, 258 kilograms in total, contained 59 grams of methamphetamine.
Police also seized 1.08 million yuan in cash in the raid and caught Cai the same day in Guangzhou.
The court also found Chen Haiyan had sold materials to another ring in July 2015 to illicitly amass 4.4 million yuan and shared the profit with others. The ring members were caught red-handed when they were making drugs on 16 September 2015.