CHINA: THIRTEEN CHINESE DRUG DEALERS SENTENCED TO DEATH IN FRONT OF 10,000 AT PUBLIC STADIUM BEFORE EIGHT ARE WHISKED OFF IN A TRUCK TO BE EXECUTED IMMEDIATELY 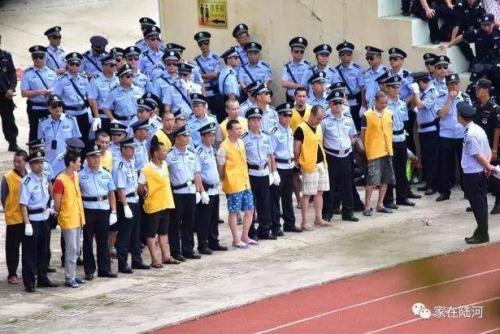 Eighteen people were paraded in front of 10,000 spectators before thirteen of them were sentenced to death

Eight were executed straight after the hearing — slammed by human rights activists as barbaric — in the southern city of Shanwei, Guangdong.
Local reports said the group were found guilty at a sports arena on June 24 of producing and selling hard drugs in a crime-riddled part of the port city.
Photos show how those that were put to immediate death were loaded on to trucks and driven out of the packed stadium.
They were among a total of 18 people who appeared to face drugs charges, with five handed suspended sentences and a further five having their executions postponed.
Beijing News said the area of Lufeng, home to 1.7 million people, is a criminal hotspot which authorities have been on a ruthless mission to clean up.
In 2015 a crowd of 38 dealers appeared for a trial in front of 10,000 spectators — with 13 people handed death sentences and three executed immediately, Beijing News reported.