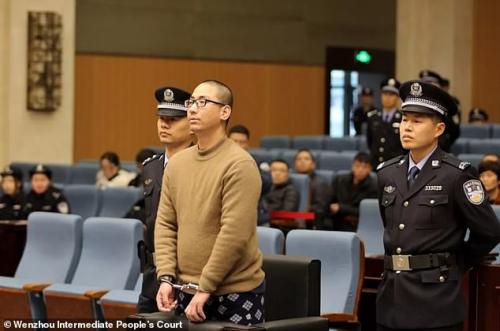 A Chinese father recovering from schizophrenia was executed on 17 July 2020 for killing a classmate of his daughter's in a school toilet following a dispute between the two children.
Lin Jianxia, 37, stabbed the nine-year-old boy to death in 2018 in a revenge attack after the pupil was said to have hit Lin's daughter during an argument.
The murder took place on the afternoon of 21 September 2018, at a primary school in Rui'an in the city of Wenzhou, Zhejiang Province.
Although Lin's lawyer defended the man's actions on the grounds of his mental illness, a local high court ruled that his schizophrenia had gone into remission at the time of the crime.
The judge deemed that Lin was capable of bearing full criminal responsibility and found him guilty of intentional homicide.
Officers from the Wenzhou Intermediate People's Court carried out capital punishment on Lin this afternoon after receiving an order of execution from the country's Supreme People's Court, according to a court statement.
The Supreme Court also rejected Li's lawyer's claim that the man was mentally ill while carrying out the killing, calling the allegation 'untrue'.
Lin appealed against the court's ruling after being sentenced to death on 1 March last year.
In a second and final trial last December, the High People's Court of Zhejiang agreed with the previous ruling.