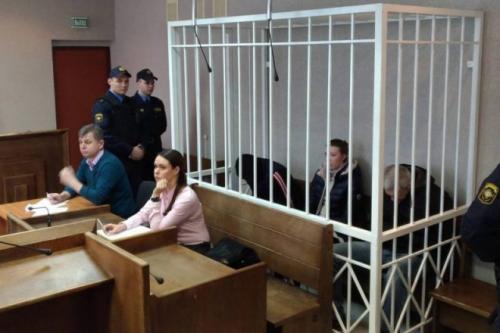 Minsk City Court sentenced two persons to death after a retrial.
Vyachaslau Sukharko and Alyaksandr Zhylnikau were found guilty of murdering three people in December 2015. One more defendant in the case, Alina Shulhanava, was sentenced to 12 years in prison.
Sawmill workers Sukharko and Zhylnikau were accused of murdering three people, robbery and stealing documents.
Alina Shulhanava, a nursery school teacher and former employee at the state-controlled youth organization BRSM, was charged with the organisation of causing a grievous bodily harm, which resulted in death, and preparation for abducting a person.
The charges stem from two episodes that took place in December 2015 in Minsk.
27-year Alina Shulhanava failed to come to terms with the fact that her ex-boyfriend was dating another woman. Shulhanava hired Vyachaslau Sukharko and Alyaksandr Zhylnikau to threaten and beat the couple. However, the perpetrators went a bridge too far and killed the both.
Immediately after their arrest, it became known that Sukharko and Zhylnikau were involved in another murder in the town of Kalodzishchy near Minsk. A 59-year-old man who let an apartment to one of the defendants turned out to be another victim.
On 6 March 2017, the Minsk City Court sentenced the two men to life imprisonment. However, on July 14, the Supreme Court sent the case for retrial.
All the defendants did not accept the verdict. During the hearing in the Supreme Court Sukharko asked to replace his life term with execution, while Zhylnikau and Shulhanava asked for the mitigation of the sentences.