BANGLADESH: THREE SENTENCED TO DEATH IN RAJBARI FOR GANGRAPE OF FEMALE DOCTOR 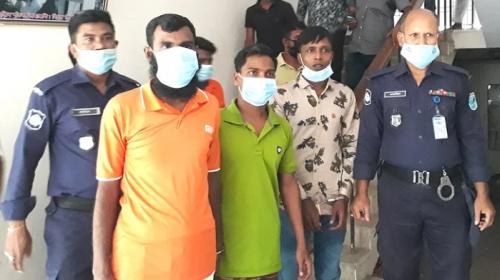 Three sentenced to death for gang rape of a female doctor

A court in Rajbari district on 2 September 2020 sentenced three accused to death in a gang rape case filed by a female doctor.
Judge Sharmin Nigar of Woman and Child Repression Prevention Tribunal of Rajbari delivered the judgement early 2 September afternoon.
Besides, three people were acquitted of the case as allegations against them could not be proved.
The convicts were Rana Molla, 27, son of late Abul Molla, of village Majlishpur in Basantpur union under Rajbari sadar upazila, Hannan Sardar, 32, son of late Munnaf Sardar of the same village, and Mamun Molla, 22, son of Arshad Molla of village Duttapara in Khankhanapur union.
The three convicts were present at the court during the pronouncement of judgement.
It may be mentioned that the female doctor reached Goalundo crossing on her way to Gopalganj from Dhaka at night on 23 February 2018. There she was waiting for Faridpur-bound bus.
At that time, Rana, Hannan and Mamun told her of taking to her destination. Accordingly, they requested her to get into their battery-driven easybike. From there the culprits took her to Majlishpur Nihaj Jute Mills area in Basantpur union. Then they took her to nearby bush tying her face from behind.
The culprits raped the female doctor one after another forcibly. Later, they brought four others calling them on their mobile phones. They also gangraped the woman one after another.