BANGLADESH: FATHER, UNCLE GET DEATH PENALTY FOR THE MURDER OF FIVE-YEAR-OLD CHILD 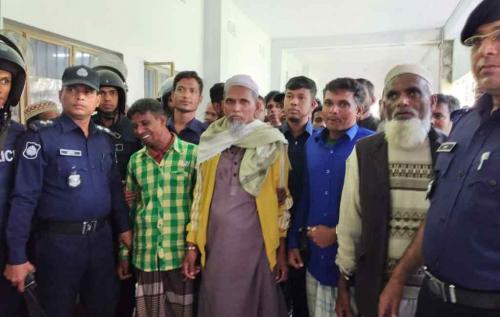 Police presents the convicts in front of the media

A Sunamganj court on 16 March 2020 handed down the death sentence to two people in connection with the murder of five-year-old child Tuhin Hasan last year.
District and Session Judge Wahiduzzaman Sikder gave the verdict.
The convicts are Tuhin’s father Abdul Basir and uncle Nasir Uddin.
The court also acquitted Tuhin’s other uncles Jomshed Ali and Abdul Mosabbir from the case.
Five-year-old Tuhin was murdered by his own relatives in Sunamganj’s Derai upazila on 14 October 2019.
The murder, which drew condemnation from people across Bangladesh on social media, took place in the early hours in Kejaura village under the upazila’s Rajanagar union.
During primary interrogation, Tuhin's father Basir, and uncle Nasir confessed to the murder. Police also said Basir and Nasir committed the murder to frame rivals and establish local dominance.
The murderers had left the child’s body hanging from a tree near the family’s house, after stabbing him, slitting his throat, and cutting off his ears and genitals. The killers also left two knives they had used to kill him, jammed in his abdomen.