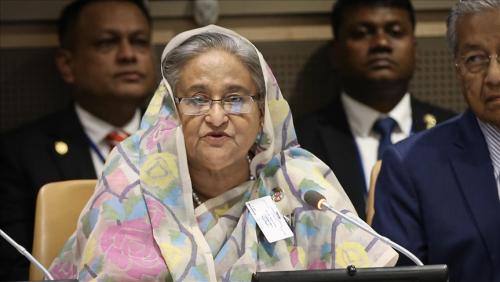 A Bangladeshi top court on 17 February 2021 upheld the death sentence of 10 militants in a two-decade-old case related to the attempted assassination of Prime Minister Sheikh Hasina.
The High Court acquitted an accused in its verdict, Deputy Attorney General Bashir Ahmed said while briefing the media after the verdict.
The convicts are members of banned militant group Harkatul Jihad.
The verdict was delivered by the judges via video link due to the ongoing pandemic.
The convicts who were sentenced to death are Washim Akhtar alias Tareq Hossain, Md Rashed  alias Abul Kalam, Md Yusuf alias Abu Musa Harun, Sheikh Farid alias Maulana Shawkat Osman, Hafez Jahangir Alam Badr, Maulana Abu Bakkar, Hafez Maulana Yahya, Mufti Shafiqur Rahman, Mufti Abdul Hai and Maulana Abdur Rauf alias Abu Omar.
Among those accused in the case, 13 are in prison, while 11 are absconding.
In 2016, a Dhaka tribunal sentenced 10 militants to death and handed down jail terms to four others.
In the case dating back to 2000, security officials recovered a bomb at the site of a rally where Hasina was going to address in Dhaka.
Bangladesh has so far banned nine regional militant groups, including Ansar Al Islam and Harkatul Jihad.