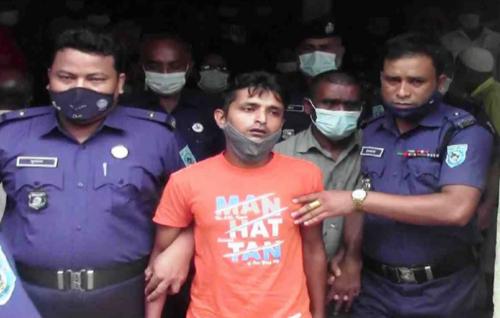 A Gaibandha court on 17 August 2021 morning sentenced a man to death in a case over his involvement in smuggling heroin.
The convict has been identified as Md Parvez, 31.
However, three others accused in the case were granted bail, reports UNB.
Senior District and Sessions Judge Dilip Kumar Bhowmik also fined the convict Tk1 lakh.
According to the case details, Parvez, supervisor of a bus that was headed towards Dinajpur’s Hili, was arrested in Gaibandha’s Gobindaganj upazila by Rapid Action Battalion (RAB-13) back in 2018.
Around 450grams of heroin were seized from his possession.
The RAB team carried out the drive upon a tip-off that a drug syndicate active in the country’s northern region was smuggling heroin in Bogra.
Subsequently, a case was filed under the Narcotics Control Act with Gobindaganj police station over the matter.
Public Prosecutor Saiful Islam Prince said that as Parvez’s guilt was proven at the court, he was given the death penalty while the other accused were granted bail due to lack of evidence against them.