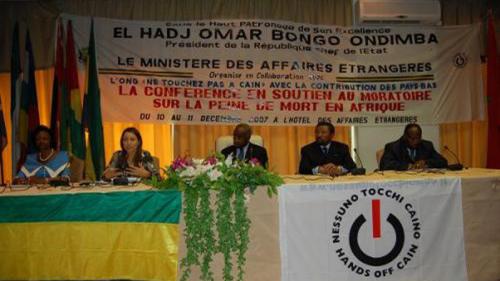 
Noting that the death penalty remains a sanction applied in numerous countries;

Believing that the death penalty has never constituted a deterrent to crime;

Adopting in earnest the spirit of the African Charter of Human and People’s Rights as well as the other international human rights instruments that make life an inviolable individual right;

We, the participants at the conference in support of the international Moratorium on capital punishment, meeting in Libreville, capital of the Republic of Gabon, on December 10 and 11, 2007, adopt the following Declaration:

We pay homage to the actions of His Excellency El Hadj Omar BONGO ONDIMBA, President of the Republic of Gabon, Head of State, and to the Government of Gabon for their support for the abolition of the death penalty at the national and international level,

We gladly welcome the growing number of States and Territories that have, in law or in practice, renounced the application of the death penalty,

We applaud the decision of the Third Committee of the United Nations General Assembly, on November 15, 2007, to collectively present a resolution that asks for a moratorium on capital punishment in view of the abolition of the death penalty,

We reaffirm our commitment to peace, through the respect of the rule of law at the national and international level,

We commit ourselves to definitively renounce the application of the death penalty and to support the Non-Governmental Organisation “Hands Off Cain” in its international campaign in favour of the Moratorium of the death penalty until all States and Territories have abolished it,

We launch a solemn appeal to the Member States of the African Union and the Organisation of the United Nations to support the resolution for the Moratorium on the death penalty, attached to this declaration, in view of the vote at the General Assembly on December 18, 2007,

We ask the European Union and the United Nations to mobilise the necessary resources for supporting the States and Territories that have abolished the death penalty in their legislation or that have begun the process of abolition starting from the African continent.