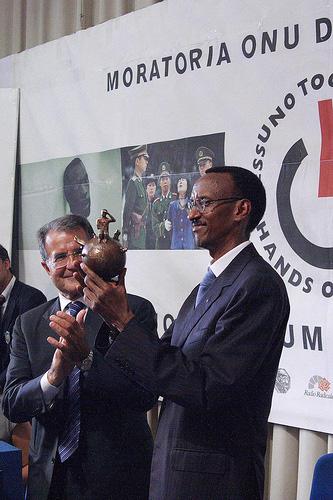 Rwandan President Kagame with "The Abolitionist of the Year" Award

The unexpectedly violent tone of Nigrizia's statements shock us more than the content. This is not language that a man of the church should use.

Sadly, we already knew the Comboni Fathers' positions on this issue, which are very different to ours and naturally we respect them. However, to compare Kagame to Hitler and call him one of the worst criminals in history is an outrageous inaccuracy that the Comboni Fathers must be aware of. In Rwanda, there is a parallel of Hitler's genocide of the Jews. However, Kagame and his ethnic group weren't the perpetrators of the genocide, they were the victims. Furthermore, while the international community stood by and watched, it was only the intervention of Kagame's troops that ended the genocide.

There was a 'Hitler' in Rwanda who conceived, instigated and executed the genocide. Actually there were several. And they were all Hutu extremists, belonging to ex President Habiarimana's clan.

Unfortunately, by favouring the Hutu the Rwandan church did not distinguish between extremists and moderates. Even worse, this favouritism reached the point of being complicit in the genocide, as evidenced by the trials of religious people who were condemned not by the eventual victors, but by Western countries.

Maybe to mitigate this serious responsibility, some parts of the church (that Nigrizia seems to want to be part of) launched an insane campaign to try and prove that there was no genocide in Rwanda, but rather a civil war, and that the genocide was actually a double genocide. They claimed that the crimes of the Hutu genocide troops are equal to those of Kagame's soldiers.

However, this argument is simply unsustainable. In Rwanda there was only one genocide. It was desired, planned and executed in the cruellest ways by a well identified group of Hutu extremists. The genocide involved a mass extermination of ethnic Hutu Rwandans. The extremists were driven by frenetic propaganda and transformed into cruel assassins capable of killing hundreds of thousands of men, women and children with machetes. The skulls that have been broken by machetes that are kept in the genocide museums are a chilling testimony. Ignoring all these horrors and defining Kagame as a type of Hitler is not only a clumsy attempt to manipulate history, it is also an insult to the victims and to the survivors of the genocide. It is equally an insult to all the people (the priests included) who risked their lives to save victims from the hands of executioners, and who today tell a version of history very different to that of Nigrizia.

There is no doubt that Kagame's troops have committed crimes, and that action must be taken so that those responsible are punished for these crimes. There is also no doubt that thousands of Rwandans, many innocent, were killed in the wars that followed the genocide in Rwanda and in Congo. However noone can, in good faith, accuse Kagame of having planned and instigated the extermination of the Hutu, and therefore hold him responsible for genocide. It is very clear who is responsible for the genocide of the Tutsi and of the moderate Hutu. The genocide was started on a large scale only a few hours after the downing of President Habiaramana's plane, which shows that it had been planned in detail by the exponents of the old regime long in advance. Equally planned were the methods of genocide, in which the largest number of Rwandans would be forced to participate. The diabolical strategy of the perpetrators of the genocide was actually very simple: if everyone is guilty, noone is guilty. Voluntarily or non-voluntarily, the positions like those expressed by Nigrizia support the last perpetrators of the genocide still hiding in the forests of Congo.

Kagame certainly is no angel, and Rwanda isn't the most perfect example of a Western style democracy. But before attempting to lecture, one should remember that only thirteen years ago a group of extremists unleashed the most horrific genocide of the last century with the intent of exterminating the ethnic group that the current government belongs to. The wounds of these horrors are still open, and it will take more than one generation before they heal. Maybe it would be wiser to support the current process of national reconciliation, even if it is imperfect, than to invent theories that try to cancel the responsibility we all have in the Rwandan tragedy for not stopping the genocide when we could have, and for waiting too long before acknowledging it.

The prize that Hands Off Cain awarded to Kagame is for Abolitionist of the Year, not for being a champion of democracy or a defender of human rights.
Rwanda has a tragic history. The fact that a country like this has abolished the death penalty is of great symbolic value. It is for this that we have awarded the prize to President Kagame, and we are proud to have done so.

Kagame has also been accused of only abolishing the death penalty to facilitate the extradition of criminal suspects hiding overseas. However this is an unfair criticism. In the past, problems with the death penalty in extradition cases have been resolved by ruling out the option of capital punishment for those returned to the Rwandan authorities. From this point of view, abolishing capital punishment in Rwanda has been a costless and unilateral act. Moreover, the debate on abolition has not only involved the halls of parliament, but the entire population, from university campuses to the smallest villages in the country.

We congratulate President Kagame on his initiative to abolish the death penalty in Rwanda as part of the process of national reconciliation, and also on his commitment to participating in the global coalition of countries in favour of a universal moratorium on executions. This is the Rwanda that we have awarded: a country that has decided to reconcile itself with its history and to break the absurd cycle of violence, hate and revenge. In extreme situations, even the most catastrophic ones, it is important to acknowledge signals and steps made in the right direction, no matter how small. It is also important to look to the future, rather than chain a country and its people to their past. Giving the prize to Kagame is an investment in the future of Rwanda, not an acknowledgement of its past.