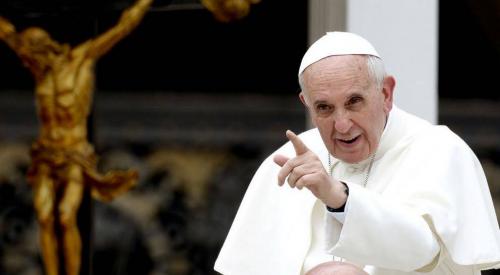 “THE ABOLITIONIST OF THE YEAR 2015” AWARD

“The Abolitionist of the Year 2015” Award, which is promoted by Hands off Cain to recognise the person, who, above all others, has demonstrated an extraordinary commitment in the struggle for a moratorium on executions and the abolition of the death penalty, is conferred this year upon Pope Francis, whose pontificate was inaugurated by the abolition of life imprisonment, and the introduction of the crime of torture in the criminal code of the Holy See.
On 23 October 2014, in his address to the Delegates of the International Association of Penal Law, a “lectio magistralis” of extraordinary humanistic, political and legal value, Pope Francis described the life sentence as “a death penalty in disguise,” which should be abolished just like the death penalty, and compared solitary confinement in the so-called “high security prisons” as “a form of torture.”
When, in 1993, we founded our Association against the death penalty, inspired by a passage in Genesis which reads “And the Lord set a sign upon Cain, lest any finding him should smite him,” we decided to name it “Hands Off Cain” to affirm not only the value of life but of a person’s human dignity as a whole.
Hands Off Cain recognises the Holy Father, the prodigious value of his words, essential and inspiring for anyone wishing to carry out concrete initiatives, always more necessary and urgent, in moving, once and for all, beyond degrading and inhumane punishments, cruel and anachronistic treatments, which condemn any State that practices them to become Cain himself.

“The Abolitionist of the Year” Award, a work in bronze created specifically by artist Massimo Liberti, represents the earth as a ball on which children are seated on high and looking off in the distance.