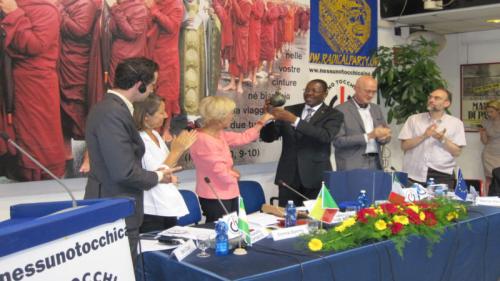 The Abolitionist of the Year 2014 Award, with Emma Bonino and Bako Arifari, Minister for Foreign Affairs of Benin, July 2014, at the Radical Party headquarter, in Rome

“THE ABOLITIONIST OF THE YEAR 2014” AWARD

“The Abolitionist of the Year 2014” Award, which is promoted by Hands off Cain to recognize the person, who, above all others, has demonstrated an extraordinary commitment in the struggle for a moratorium on executions and the abolition of the death penalty, is conferred this year upon Boni Yayi, President of the Republic of Benin.
Starting with his election to the helm of Benin in 2006, Boni Yayi put the abolition of the death penalty among the fore of important reforms to be carried in the Country. “It is necessary to find ways to reconcile the evolution of law towards a greater humanity with the application of penalties that help to correct and re-orient those who are lost or relegated to the margins of society,” President Yayi wrote in his Preface to Hands off Cain’s 2014 Report.
In February 2009, a year after its creation by presidential decree in February 2008, the ad hoc Commission for Revision of the Constitution rephrased Article 15 of the Basic Law of Benin in these terms: “Every individual has the right to life, liberty, security and the integrity of their person. (…) None can be sentenced to death.”
On 5 July 2012, Benin adhered to the Second Optional Protocol to the International Covenant on Civil and Political Rights aiming at the abolition of the death penalty. In August 2011, with an overwhelming majority, the National Assembly of Benin had voted in favour of ratifying the Second Optional Protocol.
On 20 December 2012, Benin co-sponsored and voted in favour of the Resolution on a Moratorium on the Use of the Death Penalty at the UN General Assembly.
In early July 2014, Benin hosted a pan-African conference to raise awareness of governments of the continent for voting in favour of the new pro-moratorium Resolution on the agenda of the UN General Assembly in December 2014, and for the adoption of an additional Protocol to the African Charter on Human and Peoples’ Rights on the abolition of the death penalty.

“The Abolitionist of the Year” Award, a work in bronze created specifically by artist Massimo Liberti, represents the earth as a ball on which children are seated on high and looking off in the distance.