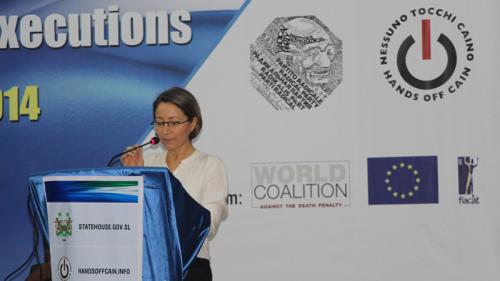 We, delegates and participants in the Conference on the Abolition of the Death Penalty and/or Moratorium of Capital Executions, held in Freetown, 13/14 January 2014, at the invitation of the Attorney General of Sierra Leone and Hands Off Cain;
Grateful to the Government of Norway for its sponsorship of the event, and the Nonviolent Radical Party, Transnational Transparty for having foreseen, over 20 years ago, the importance of promoting a global campaign to arrive at the final abolition of the death penalty through the promotion of national and international moratoria;
Acknowledging the role of Manifesto 99 in the organization of the event;
Welcoming the contributions from governmental delegations, independent experts and representatives of civil society that have enriched the two-day debate with ideas and proposals coming from participants;
Welcoming the fact that Africa gave the main contribution during last years to speed up the abolitionist process with the abolition in Rwanda, Burundi, Gabon, Togo and Benin;.
Welcoming the proposal by the Parliamentarians for Global Action to launch a network of legislators to work towards total abolition of the death penalty as well as the active participation of the representatives from the World Coalition Against the Death Penalty and the FIACAT made possible with the support of the European Union;
Welcoming the role of the Commission in initiating the process of the additional protocol, as mandated by the African Charter on Human and Peoples’ Rights;

Whereas:
The death penalty was not normally a part of the traditional African justice system;
Whereas:
In April 2010, the African Commission on Human and Peoples’ Rights organized an ad hoc regional meeting in Cotonou focusing on northern and western African countries targeting the means to achieve the abolition of the death penalty;

Mindful:
that Africa is the continent where there is the largest number of de facto abolitionist countries and where, in recent years, there have been significant steps towards the total abolition of the death penalty.

Recalling:
that various international instruments that safeguard the right to life;
that after resolutions passed in 2007, 2008 and 2010, in 2012 the UN General Assembly adopted a resolution on a Universal Moratorium of capital executions presented by 90 states from all continents that was adopted with the record number of 111 votes in favor 41 against, with 34 abstentions with all the new votes in favor coming from Africa (Sierra Leone, Chad, Central African Republic, Tunisia and South Sudan);

Convinced that:
a moratorium on the use of the death penalty contributes to the respect of human dignity and to the enhancement and progressive development of human rights and to the total abolition of capital executions;

We urge African States:
to co-sponsor and vote in favor of the Resolution calling for a worldwide moratorium on executions at the 2014 UN General Assembly, and work towards an effective implementation of such a document and to convene before the UN vote another continental conference, possibly in Benin, to prepare for that;
to ratify Human Rights Instruments that prohibit the death penalty, namely the second optional protocol to the International Covenant on Civil and Political Rights, and align national legislation accordingly;
to make available to the public relevant information with regard to capital executions and alternatives to the death penalty also through the introduction of a special UN figure;
to progressively restrict the use of the death penalty and reduce the number of offences for which it may be imposed;
to establish in the interim a moratorium on executions with a view to eventually abolishing the death penalty;
to work towards the definition of an Additional Protocol to the African Charter on the Abolition of the Death Penalty in Africa to give all AU member states, which have not yet abolished the death penalty, a chance to adopt a binding instrument calling for the abolition of the death penalty;
to aspire to principles of restorative justice that take into account the experience of the victims and therefore pursue peaceful national reconciliations;
to do their utmost to urge Members of Parliament, Civil Society, traditional and religious leaders to work together at the national, regional and international level to support the global campaign against the death penalty.