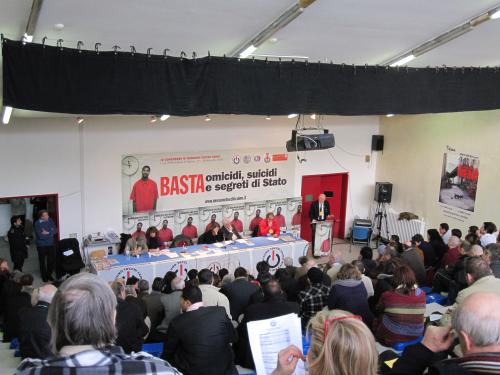 the Hands Off Cain Congress IV took place on December 17 and 18 in Padova Jail. The Association’s Secretary and Treasurer both gave speeches that were approved.
In light of the extraordinary success of the Universal Moratorium on capital punishment on December 18, 2007, at the United Nations General Assembly, the Congress declared it absolutely necessary to urgently launch a campaign to ensure that these gains are not lost.
The moratorium has huge human and civil importance to the whole world. It was achieved after almost fifteen years of commitment by Hands Off Cain and the Radical Party. It was promoted above all by Italy, with all governments from 1994 to the present day giving their support.
At the congress, it was noted with satisfaction that in fifteen years of international non violent initiatives, the UN Moratorium was not the only achievement. 54 countries have abandoned the death penalty, 15 of which did so in the last three years. The “Hands Off Saddam” campaign, which was based around Marco Pannella’s thirst strike, started at the end of December 2006. After the dictator’s execution, the objective was immediately broadened to gaining a Universal Moratorium on executions.
To support and accelerate the realisation of a moratorium on executions, with the view of definitively abolishing the death penalty, the Congress committed Hands Off Cain to two main initiatives.
The first initiative is the abolition of “State Secrecy” regarding the death penalty. In many countries, mainly authoritarian ones, information on the application of capital punishment is not provided. This lack of information causes a larger number of executions.
The UN Secretary General therefore should create a Special Envoy with the task of not only monitoring the situation and demanding greater transparency in the capital punishment system, but also to persuade countries that still use the death penalty to adopt a moratorium according to the United Nations’ request.
The second initiative is to defend the Resolution around the world and organise political, parliamentary and public events in countries that still use the death penalty.
Africa, the continent with the highest number of de facto abolitionist countries, will be the initial focus. There have been significant steps towards the abolition of the death penalty in Rwanda, Burundi and Togo, just to mention countries that became abolitionist in the last two years. Hands Off Cain has already held conferences in Gabon and the Democratic Republic of Congo. These led to progress towards parliamentary proposals for abolition. In the Democratic Republic of Congo in particular, the abolition of the death penalty would be a symbol from a country that was, at one time, the martyr of Africa. It would also be a symbol of the continent’s capacity to heal its conflicts, achieve democracy and launch the message of non violence and tolerance.
At the congress, Hands Off Cain denounced the paralysis of the Italian Justice system’s administration. This is caused by the eleven million pending trials and the dramatic conditions of jails that hold twenty thousand more inmates than they should. Based on daily monitoring carried out by “Ristretti Orizzonti”, since January, 68 prisoners have committed suicide and another 102 have died from “illness”.
Italy loses tens of cases every year at the European Court of Justice due to miscarriages of justice and violations of fundamental human rights. To confront this illegal situation, Hands Off Cain supports Marco Pannella’s proposal of an amnesty to free the courts of the heavy backlog that is paralysing the system. He proposes a legal amnesty, decided by the parliament, to replace the unofficial amnesty and “prescriptions” that are decided by magistrates (which cancel 200,000 crimes per year). Moreover, we support the proposal contained in the Motion submitted to the Chamber of Deputies by Rita Bernardini and the Radical Parliamentarians. This motion was supported by more than 90 parliamentarians of all political backgrounds. Its goal was to strengthen the application of alternative measures to detention under the abovementioned «Gozzini» laws and home detention, to create institutions or «soft jails» for people with drug and alcohol dependencies, to review the system of security measures that “inmates” who risk “jail for an undetermined time” are subjected to, to radically modify article 41-bis of the penitentiary rules to which prisoners are subjected to in the abovementioned «hard jails», and to radically modify the laws that exclude the granting of “alternative measures” to these inmates, in particular the conditional freedom after at least 26 years in jail for those sentenced to life imprisonment. This punishment is evidently contrary to the constitutional principles of re-education and re-socialisation of the prisoners. The abolition of these laws is therefore urgent.
At the Congress, Hands Off Cain committed to supporting parliamentary proposals and promoting public initiatives to create a National Commission for human rights in Italy and regional guarantors of private people’s freedom. These guarantors would act as democratic instruments of awareness, control, of guarantees and proposals. This would not only relate to the conditions of the prisoners, but also to the conditions of police agents, directors, educators, social assistants and all the other components of the penitentiary community. They are all victims of the same humanitarian catastrophes and ordinary illegality, in jails and elsewhere, in force in Italy.
In order to support Hands Off Cain’s initiatives for the next two years in Italy and around the world, the congress commits the organisation to immediately begin a self financing campaign. The campaign’s objective is, at a minimum, to double the organisation’s finances by doubling the number of subscriptions and contributions. 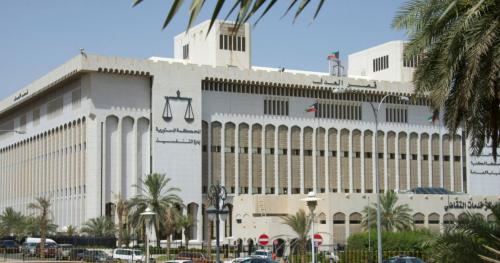 KUWAIT: AN ETHIOPIAN IS SENTENCED TO DEATH FOR KILLING AN INDIAN COLLEAGUE

IRAN - Elias Q. executed in Mashhad Prison on May 22