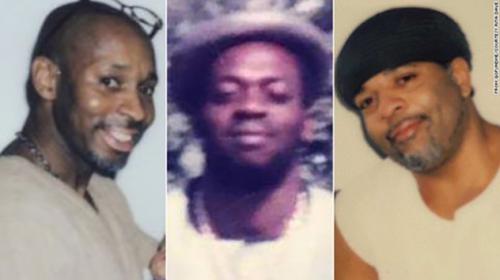 They have now been released

New York Judge Finds Queens Prosecutor Lied to Convict Three Men Wrongfully Imprisoned in 1990s Death-Penalty Case
A New York City judge has released three men from prison after 24 years imprisonment for murder, finding that a high-ranking prosecutor in the Queens County District Attorney’s office deliberately concealed exculpatory evidence while pursuing the death penalty against a teenage defendant.
On March 5, 2021, Justice Joseph Zayas, the Administrative Judge of the Queens County Supreme Court, granted a joint request by the Queens County District Attorney’s Conviction Integrity Unit and lawyers for George Bell, Rohan Bolt, and Gary Johnson to vacate their convictions for the 1996 murders of the owner of a check-cashing store and an off-duty police officer. Prosecutors had sought the death penalty against Bell in the case.
Justice Zayas found that prosecutor Charles Testagrossa, the former head of the Queens D.A.’s Major Crimes Division, hid handwritten notes and police reports implicating other suspects in the killings, statements from five eyewitnesses that contradicted key details of the crime contained in the defendants’ confessions, and medical records showing that a prosecution witness was mentally ill and psychotic.
“It astounds me and shocks my conscience that even in 1997, that constitutional violations of this magnitude can happen in any prosecution, much less the prosecution in a capital case in which the former district attorney was seeking the death penalty of a 19-year-old man,” Justice Zayas said.
“The District Attorney’s Office deliberately withheld from the defense credible information of third-party guilt that is evidence that others may have committed these crimes. This exculpatory information was in the prosecution’s possession, and had in fact been investigated and documented by the lead prosecutor at Mr. Bell’s trial,” Zayas said.
The murder, three days before Christmas, was the sixth time a New York police officer had been killed in 1996 and the then-mayor, Rudolph Giuliani, pressure police to quickly solve the case. No physical evidence linked any of the defendants to the murders, but Johnson and Bell quickly confessed after interrogations by police that their lawyers said were coercive. Johnson was unable to provide police basic facts such as the color of the get-away car. Bell’s confession, which he said was made after police beat him, contained facts that news reports said appeared to have been fed to him by police.
An investigation by the Conviction Integrity Unit, established by District Attorney Melinda Katz after she took office in 2020, found that prosecutors had failed to disclose police reports that linked a local gang to the murders.
Testagrossa left the Queens D.A.’s office in 2016 and subsequently became chief of investigations in the Nassau County District Attorney’s office. He has denied any wrongdoing in the three Queen’s cases but resigned from the Nassau County D.A.’s office four days after Justice Zayas’ ruling.
Although the Queens DA’s office agreed that Bell, Johnson, and Bolt should be released, it has not yet decided whether to drop charges or retry the men. The court’s misconduct finding is not an anomaly. At least 117 convictions in Queens County between 1985 and 2017 have been reversed because of prosecutorial misconduct.