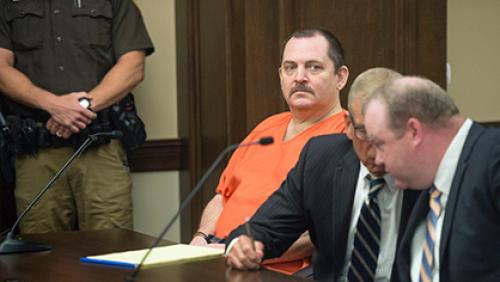 Aubrey Trail sentenced to death
A man was sentenced to death Wednesday in Saline County for killing and dismembering a young woman who refused to commit to his lifestyle of group sex and fraud.
Aubrey Trail, now 54, was convicted in 2019 of 1st-degree murder and criminal conspiracy to commit murder in the November 2017 murder of Sydney Loofe, 24. A three-judge panel sentenced Trail Wednesday at the county courthouse in Wilber.
Prosecutors said at trial that Trail and his girlfriend, Bailey Boswell, had been planning to kill someone before Boswell met Loofe on the dating app Tinder and lured her to them.
Loofe’s body parts were found in garbage bags, cut into 14 pieces and left in ditches along country roads in rural Clay County.
In his statement to the court, Trail, 54, recanted his earlier claim that Loofe died of erotic asphyxiation during rough sex and admitted that he strangled her with an electric cord, as prosecutors had alleged.
Trail becomes the 12th man on death row in Nebraska, a state that rarely carries out executions, currently lacks the drugs it needs to do so and isn’t likely to get them anytime soon.
Boswell was convicted in October of 1st-degree murder, conspiracy to commit murder and improper disposal of human remains for her role in Loofe’s death. Prosecutors are also seeking the death penalty for Boswell; a 3-judge panel will start hearing evidence to determine her fate June 30.
If she’s sentenced to death, Boswell will become Nebraska’s 1st female death-row inmate.