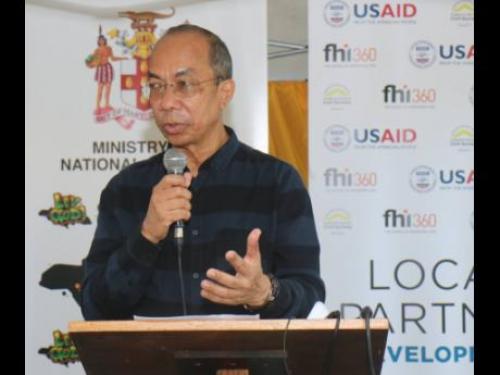 While not ruling out a return to the death penalty, National Security Minister Dr Horace Chang says imposing a life sentence will be more effective in the drive towards eradicating crimes and criminality in the society.

While not ruling out a return to the death penalty, National Security Minister Dr Horace Chang says imposing a life sentence will be more effective in the drive towards eradicating crimes and criminality in the society.
Chang made that distinction in an interview with reporters in St James on 24 May 2022 while he was presenting tablet computers to students at the Glendevon Primary and Infant School in his St James North Western constituency.
“When you take a big man who is seen as a don, you put him before a court and before a jury, try him and find him guilty, we can lock him away; and it diminishes his status in the community,” said Chang.
“It sends a signal that we are in control and I think that’s an important message to the wider community,” he said is the preferred punishment to apply to those who use the gun to commit murder.
Murders committed across Jamaica between January 1 and May 23 this year amounted to 574, an increase of 35 per cent over the 539 cases recorded for the corresponding period of 2021, according to data provided by the Jamaica Constabulary Force statistics unit.
Chang is of the view that if the death penalty remains the final form of deterrent method, criminals will continue to create mayhem until the security forces are able to apprehended them.
“To just find and kill him (gunman that commits murder) whether it is extrajudicial or judicial, it has a finality that the next man will say, alright I will take my risk and go. But to change his life dramatically by embarrassing, belittling, diminishing him I think is a very important part of turning away those who might be seeking to use the gun as a source of employment,” Chang said with confidence.
“In the immediate situation, we have to apprehend killers, and when they are apprehended and found guilty, they must be locked away for a long time so that they cannot come back and recycle,’’ he continued.
Capital punishment is a legal penalty in Jamaica. Currently, the only crime punishable by death is aggravated murder. The method of execution is by hanging.
However, in 2004, Jamaica removed mandatory death penalty for murder. The sentence remains on the books for certain categories of murder but there’s been no execution since February 1988.
Chang noted that the death penalty is debatable, “There are some of us who support it in the circumstances where they are found guilty of causing death to another citizen, others feel differently.”
Trinidad and Tobago is the only country in the English-speaking Caribbean that retains the mandatory death penalty.
That position was further strengthened by the United Kingdom Privy Council who has earlier this month ruled that the mandatory death penalty in that country is not unconstitutional.
“I am satisfied that the Privy Council has ruled in a manner that I am happy with,” declared Chang, who was addressing the matter for the first time since the ruling.