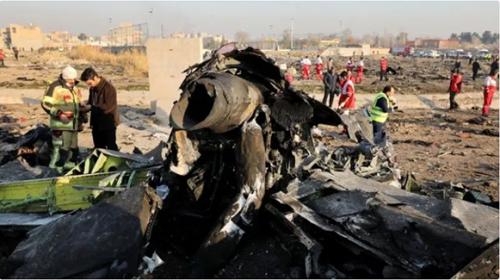 Unsolved Case of Ukraine’s Flight 752 Downed By Iran’s IRGC.
Alexei Danilov, secretary of Ukraine’s National Security and Defense Council, the overseer of the Ukrainian government’s investigation into the downing of the Ukrainian airliner in Iran by the regime’s Revolutionary Guards, said in a statement approved by the Foreign Ministry that he believed the Iranian regime had deliberately shot down the plane to possibly prevent a cycle of military tension with the United States.
The Globe and Mail quoting him wrote: “Iran does not allow anybody to examine this tragedy, and they postpone or slow down any investigations. The fact that they are investigating themselves is rather surprising, to say it politely, he said in an interview at the NDSC headquarters in Kyiv.
He added: “When they say this was accidental… I don’t buy that. It was intentional. This was a conscious attack.”
Danilov said that when he traveled to Tehran after the plane crash, he expressed his opinion to his Iranian counterpart Ali Shamkhani, but Shamkhani only assured him that his political faction was not involved in the plane crash.
He said: “when I was in Tehran talking to my counterpart, I asked him directly, ‘Why did you this?’ He gave me a very honest reply – that they were not interested in shooting down this plane, but that Iran was a country where different groups of influence exist. There are at least three different military groups under three different commands, including the Revolutionary Guards, but not only them.”
All 167 passengers and nine crew, including 55 Canadian citizens, 30 permanent residents and 53 others who were travelling to Canada via Kyiv, were killed when Ukraine International Airlines Flight 752 was shot out of the sky on Jan. 8, 2020.
The Globe and Mail added: “The Government of Ukraine demands a fair and objective investigation by Iran into the causes of the tragedy, the head of the Ukrainian delegation in Tehran, Yevhenii Yenin, said in response to e-mailed questions. ‘We don’t believe the version of human error until we see the evidence.’
“Mr. Yenin said Iran had refuse to tell Ukraine the names and ranks of the 10 people Iran says have been charged in connection with the disaster – or even what they were charged with. ‘They never co-operate in a proper manner with Ukraine, he said.”
The Deputy General Prosecutor of Ukraine Gunduz Mammadov accused the leaders of the Iranian regime of deliberately concealing the dimensions of this horrific crime and warned that Ukraine has the legal tools to establish justice and will definitely use them.
Mammadov that Ukraine has only been able to reach information from the media about the downing of the Tehran-Kiev passenger plane, but this information has been hidden in the context of official talks.
Before that, Ukraine’s Foreign Ministry had accused the Iranian regime of manipulating information about an IRGC missile attack on its passenger plane. Ukraine has also stated that the Iranian regime has contradicted the final report on the destruction of the passenger plane.
It has been more than 14 months since the air strike by the Iranian regime‘s Islamic Revolutionary Guard Corps (IRGC) on the passenger plane of Flight 752 of the Ukrainian International Airlines. Nevertheless, the Iranian regime has avoided providing clear information about the cause of the missile attack on the passenger plane.
But this is not all, even after this crime Iran’s government is continuing its crime as the Canadian Intelligence and Security Agency says in its annual report that there are ‘credible reports’ of harassment of families and relatives of victims of the Ukrainian plane victims in Canada.
(On the story of the downed plane, see also HoC 12/01/2020, 03/02/2020, 04/02/2020, 01/06/2020)