A man who was found guilty for rape and killing his sister-in-law was on 10 August 2022 sentenced to death by the Colombo High Court.

Six people on 30 June 2022 were sentenced to death after they were convicted of murdering five people in Devinuawara in 2000.

A top Sri Lankan prison official was sentenced to death on 12 January 2022 over the killing of 27 inmates in an execution-style massacre that attracted international condemnation.

A man who was found guilty for rape and killing his sister-in-law was on 10 August 2022 sentenced to death by the Colombo High Court.
Considering the evidence transpired during the lengthy trial the High Court Judge observed that the prosecution has proved the charges beyond the reasonable doubts.
Accordingly, the accused was sentenced to death by the Colombo High Court.
The case was taken up before Colombo High court Judge Mahesh Weeraman. Accused Selvanayagam Mudis Kamal (30) was a resident of Kalmunai area.
The Attorney General was filed an indictment in the High Court against the accused for raping and killing his sister-in-law in 2011, under section 296 of the Penal code. State Counsel Lishan Rathnayake and his Junior Counsel Rasangi Thilakarathne appeared for the prosecution. Police Constable Madushan Premalal (92550) appeared for Wellampitiya Police.

Six people on 30 June 2022 were sentenced to death after they were convicted of murdering five people in Devinuawara in 2000.
Matara High Court Judge Thamara Thennakoon ordered the death sentences after the six accused were guilty of shooting five people.
Five people were brutally shot dead in 2000, when a group opened fire at their van in Devinuwara.
15 people were arrested over the murders, and five of them were acquitted and released.
During the court of 22 year trial four suspects had died.
The convicted killers are all residents from Devinuwara.

A top Sri Lankan prison official was sentenced to death on 12 January 2022 over the killing of 27 inmates in an execution-style massacre that attracted international condemnation.
The Colombo High Court convicted Prisons Commissioner Emil Lamahewage, but discharged his co-accused, police commando Moses Rangajeewa, over the killings in November 2012.
The duo were indicted in July 2019 for the killings at Sri Lanka's main Welikada prison in Colombo. A total of 27 were shot dead, but evidence was gathered in respect of only eight.
A court official said the three-judge trial-at-bar handed the death penalty to the Welikada prisons chief who was convicted for the murder of one inmate.
Police commandos were used to put down a riot at Welikada and disarm inmates who had allegedly taken weapons from the armoury.
According to the state prosecutor, eight prisoners were called out by name and killed execution-style. Others were also shot dead.
Weapons were later introduced to make it look like the victims had tried to fire at jail guards, according to court documents.
They, however, did not mention who had ordered the killings.
The killings escalated international condemnation of the then government of president Mahinda Rajapaksa, the current prime minister who also faced strictures for rights abuses in the final years of Sri Lanka's 37-year-long Tamil war that ended in 2009.
Some of the inmates killed were being held over robberies at Sri Lanka's national museum and a temple.
The 2012 massacre was the worst prison violence since 50 inmates were hacked to death in a July 1983 riot. 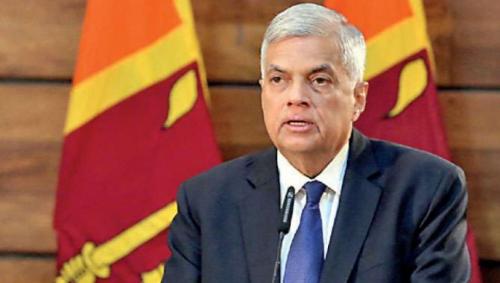 SRI LANKA: PRESIDENT INFORMS THE SUPREME COURT THAT HE WILL NOT SIGN THE DEATH SENTENCES

Sri Lankan President Ranil Wickremesinghe on 31 August 2022 informed the Supreme Court through the Attorney General that he will not sign the implementation of the death penalty.

Sri Lankan President Ranil Wickremesinghe on 31 August 2022 informed the Supreme Court through the Attorney General that he will not sign the implementation of the death penalty.
This was informed by Additional Solicitor General Nerin Pulle, who appeared for the Attorney General when several fundamental rights petitions filed requesting the annulment of a decision taken by former President Maithripala Sirisena in 2019 to execute four defendants sentenced to death for drug trafficking were called before the court.
This petition was called before a three-member Supreme Court bench comprising justices Vijith Malalgoda, L.T.B. Dehideniya and Murdu Fernando.
When the Attorney General inquired about this yesterday (30), President Ranil Wickramasinghe has informed the Attorney General that he will not use his signature to execute the death penalty and accordingly to inform the court about this when the relevant case is heard in the Supreme Court.
When the case was called yesterday, Additional Solicitor General Nerin Pulle, who represented the Attorney General, stated before the court that the government has taken a policy decision not to implement the death penalty and there is no change in that decision.
The chairman of the bench, Justice Vijith Malalgoda, informed the petitioner’s lawyers to inform the court on the next court date whether there is any need to continue this petition.
After considering the facts presented, the bench adjourned the hearing until February 23 next year.
Former President Maithripala Sirisena had made a statement on 26 June 2019 that he had decided to sign the execution of four prisoners sentenced to death for drug-related offences.
Several parties including the Sri Lanka Bar Association, the Center for Policy Alternatives, and the Organization for the Protection of Prisoners had submitted these fundamental rights petitions to the Supreme Court against the former President’s decision.
The petitions alleged that the then president’s decision was against the country’s public policy. Also, the petitioners submitted facts to the court that it is against international human rights principles, unjust and unfair.
Therefore, these petitions requested the court to issue an order invalidating the decision of former President Maithripala Sirisena.
Although Sri Lankan courts give death penalty in serious crimes such as murder, rape and drug trafficking, no executions have been carried out since 1976.