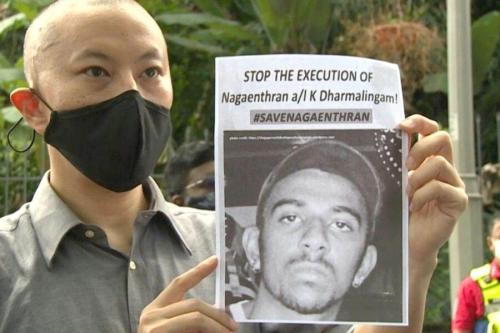 Nagaenthran Dharmalingam, a Malaysian with learning disabilities who was convicted of drug trafficking in 2010 and whose case attracted global attention, has been executed in Singapore’s Changi prison. 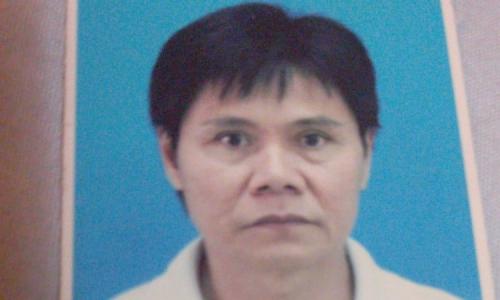 A Singaporean man on death row for drug trafficking was hanged on 30 March 2022 in the first execution in the city-state in over two years, rights activists said.

A Singapore court on 16 March 2022 rejected appeals by three men sentenced to death for drugs offences despite criticism from the United Nations and rights campaigners.

A Malaysian who rode his motorcycle into Singapore to deliver a bag containing more than 900g of a powdery substance was sentenced to death on 4 February 2022 for drug trafficking.

Nagaenthran Dharmalingam, a Malaysian with learning disabilities who was convicted of drug trafficking in 2010 and whose case attracted global attention, has been executed in Singapore’s Changi prison.
Nagaenthran, who was arrested after police found a bundle of 42.7 grammes (1.5 oz) of heroin strapped to his thigh, was hanged just before dawn on 27 April 2022, his family said.Navin Kumar, Nagaenthran’s brother, told the Reuters news agency that the 33-year-old’s body would be sent back to Malaysia where a funeral would be held in the northern town of Ipoh.
The Malaysian’s execution came after the Court of Appeal dismissed an effort by Nagaenthran’s mother to halt her son’s execution. The judges said her last-minute plea was “vexatious”.
Last month, the court called legal efforts to save Naga’s life a “blatant and egregious abuse” of the legal process, and that it was “improper to engage in or encourage last ditch attempts” to delay or stop an execution.
Nagaenthran’s case has drawn global attention to Singapore’s continued use of the death penalty, particularly in drug trafficking cases, and sparked renewed debate in the city-state itself.
Nagaenthran’s family said he had an IQ of 69, but the city state’s courts found he knew what he was doing at the time of the offence and that no additional evidence had been presented to show any decline in his intellectual abilities.
M Ravi, a lawyer who previously represented Nagaenthran, expressed his grief over the execution on Twitter, saying: “Om Shanti, may your soul rest in peace.”
He added, “You may break us, but not defeat us. Our fight against the death penalty continues.”
On 25 April, a few hundred people turned out to show their opposition to the death penalty, gathering in Hong Lim Park, a small patch of ground in the city centre that is the only place where the Singapore government allows public assemblies. There were also small protests outside the Singapore High Commission in the Malaysian capital, Kuala Lumpur.
The Malaysian government, United Nations experts, the European Union, civil society groups and celebrities including British entrepreneur Richard Branson, had also called for Nagaenthran’s life to be spared.
In a statement issued after the execution, Malaysia’s Ministry of Foreign Affairs said the prime minister and foreign minister this week had again sent a letter to their Singaporean counterparts asking them to reconsider Nagaenthran’s sentence, and suggesting they make use of the prisoner transfer agreement between the two countries.
“The use of the death penalty for drug-related offences is incompatible with international human rights law,” the UN High Commissioner for Human Rights wrote in a statement calling on Singapore to halt Naga’s execution. “Countries that have not yet abolished the death penalty may only impose it for the “most serious crimes”, which is interpreted as crimes of extreme gravity involving intentional killing.”
Nagaenthran had been due to hang in November, but his execution was postponed pending court appeals, which were then delayed after he contracted COVID-19.
An appeal for clemency to Singapore’s president was also rejected, and at the end of 26 April’s hearing Nagaenthran asked that he be allowed to hold the hands of his mother and other relatives one last time, the Sydney Morning Herald reported. As they reached through a gap in the glass screen to hold each other, the family sobbed. The paper said they were later allowed to spend time with him in the holding cells beneath the court, although without physical contact.
In a statement, Amnesty International’s Asia Pacific Director Erwin van der Borght described the execution of Nagaenthran as a “disgraceful act by the Singapore government” and that it was “pursuing a cruel path that is severely at odds with the global trend towards abolition of the death penalty.”
The city-state has amended sentencing guidelines to allow judges to send people to prison for life rather than impose the mandatory death sentence in some trafficking cases, providing the defendant meets certain conditions. Singapore maintains some of the harshest drug laws in the world and claims the death penalty acts as a deterrent.
More than 50 people are reported to be on death row in Singapore, the UN said. Singapore does not usually comment on capital cases.
“This deterrent has been repeatedly discredited, and there is no evidence that the death penalty is any more effective in reducing crime than life imprisonment,” Amnesty’s van der Borght said. “Punitive drug policies mandating harsh punishments have been shown to harm, rather than protect people from problems caused by drugs.”
Malaysia and Indonesia also impose death sentences for drugs crimes, but Malaysia has been reviewing its use in such cases and currently has a moratorium on executions.

A Singaporean man on death row for drug trafficking was hanged on 30 March 2022 in the first execution in the city-state in over two years, rights activists said.
Singapore, which has harsh anti-drug laws, had halted executions due to the COVID-19 pandemic and last meted out capital punishment in November 2019.
Abdul Kahar Othman, 68, was hanged early 30 March, anti-death penalty activist Kirsten Han said. The execution occurred despite pleas from rights activists, including the U.N. Human Rights office, to commute Kahar’s sentence to life imprisonment. Han and several others held a small vigil outside the prison late 29 March for Kahar.
Kahar, who came from a poor family and had struggled with drug addiction since he was a teenager, spent more time behind bars than as a free man, Han said. He was released from prison in 2005 after a decade of preventive detention. In 2013, Kahar was convicted of drug trafficking and sentenced to death two years later.
Kahar’s incarcerations without proper rehabilitation had made it difficult for him to walk new paths, Han said.
Han, along with the U.N. and other rights groups, have expressed concerns that executions might be accelerated in the city-state after a two-year halt.
Transformative Justice Collective, a group working for the reform of Singapore’s criminal justice system, said the families of seven other death row prisoners have recently received execution notices. Their cases were postponed due to legal appeals.
A Malaysian man with a mental disability may be next in line after he lost a final appeal on 29 March against his death sentence.
Nagaenthran K. Dharmalingam has been on death row since 2010 for trying to smuggle less than 43 grams (1.5 ounces) of heroin into Singapore. At an earlier court hearing, his IQ was revealed to be 69 — a level internationally recognized as an intellectual disability, but the court ruled Nagaenthran knew what he was doing by violating Singapore’s harsh anti-drug laws.
Rights groups have urged Singapore President Halimah Yacob to pardon Nagaenthran or commute his sentence. Malaysia’s leader, European Union representatives and global figures such as British business magnate Richard Branson have also joined calls for Nagaenthran’s life to be spared.

A Singapore court on 16 March 2022 rejected appeals by three men sentenced to death for drugs offences despite criticism from the United Nations and rights campaigners.
Roslan Bakar, a Singaporean, and Pausi Jefridin, from neighbouring Malaysia, were arrested in 2008 on drug trafficking charges and sentenced to death two years later.
The appeal of Singaporean Rosman bin Abdullah was also dismissed.
High Court Judge Kannan Ramesh, in dismissing the appeals, said no new arguments were raised that were different from earlier pleas that had been rejected and accused the complainants of abusing the court process.
“In this case, the dominant ‘extraneous purpose’ of the applications is the ulterior intention of delaying the imposition of the sentence of death that was passed on the plaintiffs by disrespecting the finality of the judicial process,” the judge said.
Rights activist M. Ravi, who is assisting the legal team representing the three men, said they were considering another appeal.
The UN rights office has urged Singapore to halt the executions, which would be the city’s first since November 2019, saying the death penalty is incompatible with international human rights law.
Rights group Amnesty International has labelled the planned executions “appalling” and urged Singapore to impose a moratorium on the death penalty.
Malaysian rights group Lawyers for Liberty raised concerns that Pausi has an IQ of only 67, which suggests he has an intellectual disability.

A Malaysian who rode his motorcycle into Singapore to deliver a bag containing more than 900g of a powdery substance was sentenced to death on 4 February 2022 for drug trafficking.
The four bundles inside the bag Kishor Kumar Raguan brought in were later analysed to contain 36.05g of heroin.
The law provides for the death penalty if the amount of heroin trafficked is more than 15g.
Singaporean Pung Ah Kiang, 61, who received the bag from Kishor, was sentenced to life imprisonment for possessing the drugs for the purpose of trafficking.
In written grounds released on Friday (Feb 4), High Court Justice Audrey Lim said she found that both Kishor and Pung knew that the bundles contained heroin.
In rejecting Kishor's defence that he believed the bag contained "stones", the judge said the 41-year-old, who was involved in drug activities, had failed to show that he genuinely believed the bundles contained something innocuous.
She found that Kishor was told that the items to be delivered were "kallu", which he knew referred to heroin.
Justice Lim also rejected Pung's claim that he did not know what was in the bag and that he was merely keeping it temporarily for his brother-in-law.
She imposed life imprisonment on Pung as he was certified by the prosecution to have substantively assisted the Central Narcotics Bureau (CNB) in disrupting drug trafficking activities.
"As the prosecution did not issue Kishor with a certificate of substantive assistance... I passed the mandatory death sentence on him," said the judge.
Kishor had brought the bag containing the bundles of drugs into Singapore on July 29, 2016, and delivered it to Pung near his Paya Lebar condominium.
Pung was arrested by CNB officers as he was walking back to his condominium. He was then escorted to his home, where more drugs were found.
The prosecution contended that Kishor knew he was delivering "kallu" - a street name for heroin - and was told to collect $6,000 from Pung.
In his defence, Kishor said he was promised RM500 ($160) to deliver something to Singapore and was told that the item was "like a stone".
He claimed that he thought they could either be decorative stones or rocks and pebbles, but did not think too much about it.