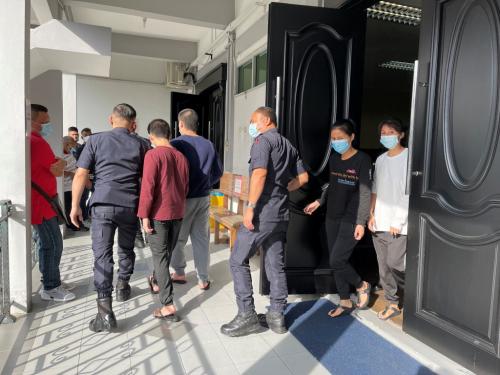 Three locals and a China national were sentenced to death by the Sibu High Court on 4 February 2022 after they were found guilty of two drug trafficking charges.

A 22-year-old woman escaped the death penalty in Malaysia on 10 April 2022, when the Muar High Court ordered her to be jailed for a period until pardoned by the Sultan of Johor, after she was found guilty of killing her husband five years ago.

A 22-year-old woman escaped the death penalty in Malaysia on 10 April 2022, when the Muar High Court ordered her to be jailed for a period until pardoned by the Sultan of Johor, after she was found guilty of killing her husband five years ago.
Judicial Commissioner Awang Armadajaya Awang Mahmud came to the decision after finding that the defence had failed to raise reasonable doubts against the prosecution’s case.
The woman was charged under Section 302 with killing her husband, Mohd Firdaus Md Sallehuddin, 28, at a house on Jalan Indah 6, Taman Pertama Indah, Sungai Abong, Muar, at about 1.30 pm, 14 October 2017.
However, Awang Armadajaya in his judgment said, as the woman was a minor when the offence was committed, she could not be sentenced to death, but rather jailed for a period until pardoned by the Sultan.
“Because on the date of the incident you were 17 years 11 months and 10 days old, you still were defined as a minor under the Child Act 2001,” he said, adding that she could appeal to the Pardon’s Board and the Sultan of Johor for commutation of the sentence.
“If you were an adult (at the time), I would have had to impose the death penalty. Thank God you are saved from the death penalty. I pray that you lead a better life after this and bring benefit to your family and the society. I have heard your lawyer’s appeal stating that your life has been full of sorrow”, he said.
Based on the facts of the case, the woman stabbed her husband - a poultry shop assistant - with a vegetable knife at the residence of the latter’s employer, in the incident that occurred about five months into their marriage.
During the course of the trial which began in 2017, seven prosecution witnesses and two defence witnesses - the offender and her stepfather - were called to testify.
The prosecution was conducted by deputy public prosecutors Muhammad Azfar Mahmod and Mustaqim Sukarno while lawyer Yoong How Kiat represented the accused.