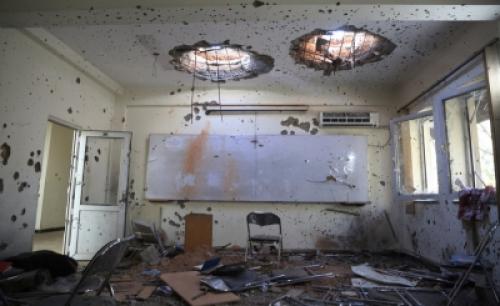 The Afghan Supreme Court has sentenced Mohammad Adil, the mastermind of the November 2020 Kabul University attack that claimed the lives of 22 people, to death.

The Afghan Supreme Court has sentenced Mohammad Adil, the mastermind of the November 2020 Kabul University attack that claimed the lives of 22 people, to death.
In a statement on 1st January 2021, the Supreme Court said that five other collaborators of the attack were sentenced to various jail terms on charges of treason, transfer of explosive materials and cooperation with Daesh terror group which claimed responsibility.
Adil, a resident of Panjshir province, was recruited by Sanaullah, a member of the Haqqani Network terror group, according to Vice President Amrullah Saleh.
He was arrested just a few days after the attack.
Adil had been missing for the last three years and it was rumoured that he has gone abroad for "studies and war", Saleh added.
On 2 November 2020, at least 22 people were killed and over 40 others were wounded after two gunmen attacked the University.
The victims included 18 students - 16 from the Public Administration Faculty and two from the Law Faculty.
All students who lost their lives aged between 20 to 26 years old.
Afghanistan's First Vice President Amrullah Saleh hit out at the Taliban for the Kabul University attack but the Taliban rejected the claims.

Afghanistan’s First Vice President Amrullah Saleh on 18 January 2021 demanded the execution of Taliban prisoners as violence surges in the country in spite of US-sponsored talks between the government and the militants.
Under mounting US pressure and following months of delay, Kabul released last summer thousands of Taliban prisoners from its custody as part of the landmark accord between the group and Washington.
But now there has been a spike in arrests of suspected Taliban fighters linked with recent attacks.
“These arrests should be executed so that it becomes a lesson for others,” Saleh told a routine security meeting in Kabul.
“The arrested like nightingales admit (to conducting attacks), but their all hope is that they will be freed one day without real punishment … any terrorist detainee should be executed.”
Known as the staunchest anti-Taliban leader in government and consistently opposed to talks with the Taliban, Saleh said he would raise his demand for the executions in the High Council of the Judiciary. His spokesman, Rezwan Murad, said the first vice president has also shared his demand with President Ashraf Ghani.
“Currently, around 1,000 Taliban prisoners have been sentenced to capital punishment,” Prison Administration spokesman in Kabul, Farhad Bayani, told Arab News.
“Such news is provoking, he wants to sabotage the process of talks,” said Zabihullah Mujahid, a Taliban spokesman, when reached by Arab News for reaction to Saleh’s push.
“We will severely take the revenge of any type of inhuman and cruel treatment of our prisoners.”
The Afghan government was excluded from the US and Taliban deal signed last February in Doha, which as per the agreement is also hosting the current peace talks between Kabul and the insurgents.
In spite of the ongoing talks, violence has surged in Afghanistan and both the government and the Taliban accuse each other for its escalation.