ZIMBABWE: MAN SENTENCED TO DEATH FOR KILLING HIS EMPLOYEE

A High Court judge on 18 October 2021 sentenced a Hwedza man to death for the murder of his employer in 2015 and throwing the body into Rhodesville Dam.

A High Court judge on 18 October 2021 sentenced a Hwedza man to death for the murder of his employer in 2015 and throwing the body into Rhodesville Dam.
Tapiwa Murombo was found guilty of the premeditated murder of Partson Musarandoga whose body was found in the dam days after he went missing. Murombo allegedly struck Musarandoga on the head with an axe at a farm along the Hwedza Highway, forged a suicide note directing him to sell properties from the deceased’s home and disappeared.
The police pursued him along the Harare-Chirundu Highway in a high-speed chase, shot him in the leg as he tried to escape and eventually arrested him. Murombo denied killing Musarandoga saying he parted with him after the deceased had agreed to give him a vehicle as payment for a US$4 000 debt.
But Justice Justice Priscillah Munangati-Manongwa ruled that Murombo had failed to convince the court that he was innocent. Munangati-Manongwa said:
“The court finds that the reasons advanced were not such as to convince the court not to pass the death sentence. In essence, after taking all factors into account, this court finds that there are no circumstances of a mitigating nature that would call for a lesser sentence.
Neither a life sentence nor a sentence of not less than 20 years will meet the justice of the case. The accused shall be returned to prison, be held until the execution of the sentence according to law.” 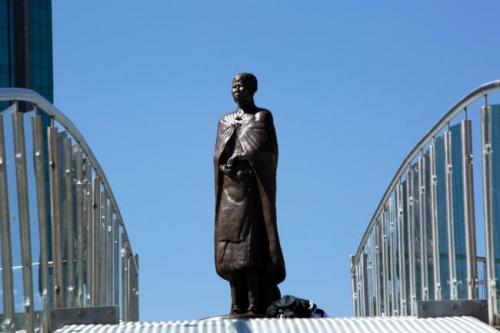 Zimbabwe’s president on 25 May 2021 unveiled a towering bronze statue in the centre of Harare, the capital, honouring a 19th-century black anti-colonialist heroine who was hanged for leading a rebellion against white occupation.

Zimbabwe’s president on 25 May 2021 unveiled a towering bronze statue in the centre of Harare, the capital, honouring a 19th-century black anti-colonialist heroine who was hanged for leading a rebellion against white occupation.
President Emmerson Mnangagwa vowed to press for the return of her skull from Britain.
Nehanda Charwe Nyakasikana, more widely known as Mbuya (grandmother in Shona) Nehanda, was hanged in 1898 for leading an anti-colonial rebellion.
She was an influential spirit medium who rallied people to fight against the seizure of their land by colonialists.
After her death, Nehanda became a symbol of resistance and inspiration for the 1970s bush war that brought an end to the white-minority ruled country of Rhodesia and led to majority rule and the independence of Zimbabwe in 1980.
Mr Mnangagwa presided over the unveiling of the statue, more than three meters high, at a major intersection in Harare, close to the place where Nehanda was hanged.
The event was held to mark the Africa Day holiday.
The statue of Nehanda “is a declaration that we stand proud of our history and identity”, said Mr Mnangagwa.
Nationalists still say her name to evoke a spirit of patriotism and a major road and the maternity wing of one of the southern African country’s biggest hospitals in the capital, Harare, are named after her.
Zimbabwe, like some other African countries, has been trying to get European museums to return skulls and other items shipped there as part of war trophies during colonialism.