1st Optional Protocol to the Covenant (signed only)

situation:
In July 2008, following a string of armed robberies, the Parliament adopted the Armed Robbery Act, including provisions allowing for the death penalty for homicides committed during acts of armed robbery, terrorism or hijacking. Liberian Penal Code of 1976, already included the possibility of the death penalty for murder as well armed robbery, mercernarism, terrorism, hijacking, treason, espionage resulting in the death were capital offences but the new law goes against Liberia’s international commitments. On 16 September 2005, in fact, the National Transitional Government, led by Charles Gyude Bryant, had acceded to the Second Optional Protocol to the International Covenant on Civil and Political Rights. President Ellen Johnson-Sirleaf, who could have opposed the legislation of 2008, signed it into law.
It seems that courts are ruling as if the Penal Code of 1976 is unaffected by the 2005 accession to the Second Optional Protocol.
In 2014, the Ministry of Justice initiated a bill to abolish the death penalty and life imprisonment for juvenile offenders, while the Independent National Commission on Human Rights (INCHR) also advocated for a Constitutional amendment abolishing the death penalty pursuant to the Constitution Review Committee process.
In 2015, no executions or death sentences were recorded in Liberia. The last executions, 14, took place in 2000.
As of 18 February 2015, nine persons were on death row, according to the Government.
In 2016, at least  5 new death sentences were imposed. None in 2017.

United Nations
On 4 May 2015, Liberia was reviewed under the Universal Periodic Review of the UN Human Rights Council. In its National Report, the Government said that Liberia acknowledged its international obligations under the Second Optional Protocol to the International Covenant on Civil and Political Rights, aiming at the abolition of the death penalty. However, in its response to the recommendations received, the Government did not support recommendations to abolish the death penalty.
On December 17, 2018, Liberia, as in previous years, abstained on the Resolution on a Moratorium on the Use of the Death Penalty at the UN General Assembly. 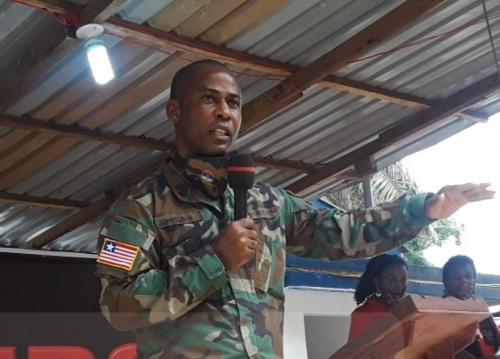 The Chief of Staff of the Armed Forces of Liberia (AFL), Major General Prince C. Johnson, on 11 July 2020 called for the introduction of a law seeking death penalty for rapists in the country, as rape and other sexual violence abuses against women and girls continue to escalate in Liberia.

The Chief of Staff of the Armed Forces of Liberia (AFL), Major General Prince C. Johnson, on 11 July 2020 called for the introduction of a law seeking death penalty for rapists in the country, as rape and other sexual violence abuses against women and girls continue to escalate in Liberia.
General Johnson’s call comes barely a few days after an officer of the Liberia National Police (LNP) identified as one Emmanuel Wesley was accused of allegedly raping a 17-year-old at the depot.
Wesley, who has been reportedly disrobed from the LNP, is said to be on the run.
General Johnson maintained that though Liberia’s international partners would not be in favor of a death penalty for rapists, tougher actions must be taken to help end the menace against women and girls.
He made these comments when he represented the Joint Security of the Government of Liberia at the launch of an awareness campaign against Sexual and Gender Based Violence (SGBV), particularly rape, against women and girls in the country.
“The international community does not actually support this decision, but with the statistics we just heard, there is the need that we start to look whether we can revisit the issue of death penalty for rapists because this is getting serious”.
General Johnson continued: “I am saying we should revisit the issue of death penalty and see how best we can fast track this whole thing”.