situation:
Aggravated murder, spying, treason, armed robbery and other military offences are capital crimes in Equatorial Guinea.
President Teodoro Obiang Nguema has ruled the country since seizing power in a military coup d'etat in 1979, when he deposed his uncle and first post independence President Francisco Nguema, who was then tried and executed.
Between 30 and 31 January 2014, at least eight and possibly nine death row prisoners were secretly executed by firing squad in three different places of the country, announced the opposition party Convergencia para la Democracia Social (CPDS). Four men, who were identified as Tadeo Mitogo Alo, Mariano Nguema Ela and Abraham Ndong from Equatorial Guinea, and Amadou Tamboura from Mali, were executed in the prison of Evinayong, Central Equatorial Guinea. They had been convicted of murder and sentenced to death by ordinary courts between 2003 and 2013. According to CPDS, the four were only notified of their imminent executions 30 minutes before they were carried out. Several armed soldiers had taken them from prison and brought to a shooting range in the village of Misong Minvi, two kilometers south of Evinayong, where they were shot. Reportedly, neither the families nor their lawyers were informed prior to the executions. On the previous day, 30 January, another four death row prisoners were reportedly executed on the island of Bioko, on a road 15 kilometres from the capital Malabo. "Elements of the Army and Security forces were seen burying four coffins in the municipal cemetery of Malabo," CPDS said, adding that it was "very likely" that one more prisoner was executed in Mbini on the western coast, bringing the possible number of executions to nine. CPDS said the executions would be the result of a "superior decision" by Obiang Nguema’s regime to end the lives of all those condemned to death.
The previous executions had taken place on 21 August 2010, when four men – Jose Abeso Nsue, Manuel Ndong Anseme, Alipio Ndong Asumu and Jacinto Micha Obiang – were sentenced to death and executed on the same day for attempting to assassinate President Nguema.
On 13 February 2014, the President of Equatorial Guinea, Obiang Nguema Mbasogo, signed the Decree 426/2.014 which establishes a moratorium on the death penalty with immediate effect. The Decree states that there will be no death penalty and that this moratorium will follow a process that has its procedures and will lead to the abolition of the penalty in the country. The decision follows a requirement made by the Community of Portuguese Language Speaking Countries (CPLP) to introduce a moratorium on capital punishment as a condition to join as a full member the CPLP, where none of the country members applies it.
On 5 May 2014, Equatorial Guinea was reviewed under the Universal Periodic Review of the UN Human Rights Council. With regard to abolishing the death penalty or at least establishing a moratorium, the Government said it conducted studies on the matter and concluded that a moratorium was the most appropriate course of action. Legislation was therefore developed, to be discussed by the Interministerial Council and promulgated very shortly. While the death penalty is provided for in article 13 (a) of the Constitution, the Government of Equatorial Guinea adopted a decree (Decree 426/2.014) declaring a temporary moratorium on the death penalty. Therefore, the delegation accepted the recommendations to promulgate legislation on a moratorium on the death penalty with a view to abolishing the practice, and sign and ratify the Second Optional Protocol to the International Covenant on Civil and Political Rights.
In 2017, tehere were at least 2 new death sentences according to Amnesty International and 2 inmates were on death row at the end of the year.

President of Equatorial Guinea, Obiang Nguema Mbasogo, has signed the resolution 426 which states that

President of Equatorial Guinea, Obiang Nguema Mbasogo, has signed the resolution 426 which states that

President of Equatorial Guinea, Obiang Nguema Mbasogo, has signed the resolution 426 which states that there will be no death penalty and that this moratorium will follow a process that has its procedures and will lead to the abolition of the penalty in that country. The decision follows a requirement made by the Community of Portuguese Language Speaking Countries (CPLP) to introduce a moratorium on capital punishment as a condition to join as full member the CPLP, where no country member applies it.
close all 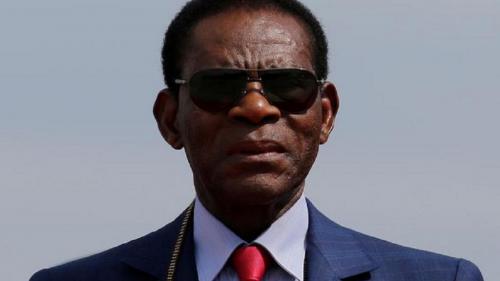 The last time Equatorial Guinea applied the death sentence was in 2014 but President Obiang Nguema has given a strong hint that the judicial measure will soon be abolished.

The last time Equatorial Guinea applied the death sentence was in 2014 but President Obiang Nguema has given a strong hint that the judicial measure will soon be abolished.
The abolition is premised not on the years of advocacy by human rights groups but from pressure by a political bloc that the country belongs to, the Community of Portuguese Language Countries, CPLP.
President Nguema’s assurance on the decision to abolish was during a visit to Cape Verde where he said the abolition of death sentence was all but done but he only wanted the process to be democratic.
“So my government will soon put this question to parliament, where my party has a majority. I am sure that this proposal will be approved,” he is quoted as saying.
The country has been a member of the CPLP since five years ago. As part of reforms they were tasked with on joining, the need to abolish the death penalty was listed.