situation:
Cameroon applies the death penalty for treason. The Criminal Code also prescribes the death penalty for serious crimes including murder committed with premeditation, acts of violence or physical assaults against a government employee, with the intention of killing him, and aggravated theft. Following criticism that the definition of aggravated theft was extremely vague, in December 1990 Parliament adopted an amendment to the Criminal Code, stating that a crime can be considered aggravated theft only if the violence has led to death or serious injury. Traffic in toxic or dangerous wastes was made a capital offence in December 1989.
Any final death sentence handed down by the national courts is automatically the subject of a mercy petition to the President of the Republic, who may decide to exercise clemency by virtue of discretionary powers. The sentence cannot be carried out until the President has rejected the petition.
The Head of State has signed decrees to commute and remit the sentences of death row inmates on several occasions, including a 1991 amnesty law releasing the still-jailed perpetrators of a failed 1984 coup d’etat. Some of the conspirators had been put to death on 6 April 1984.
On 20 May 2008, on the anniversary of the independence of Cameroon, President Paul Biya issued another decree commuting all death sentences to life imprisonment. Prisoners whose death sentences had been commuted to life imprisonment in previous years had their sentences reduced to 20 years’ imprisonment.
On his 3 November 2011 inauguration for another term as President, Paul Biya commuted some death sentences to life imprisonment. Sentences of life imprisonment were commuted to 20 years' imprisonment, and 10-year sentences were reduced by eight years. On 19 February 2014, Cameroon President Paul Biya commuted the sentences of death row inmates to life jail terms.
Cameroon’s most recent judicial execution was carried out in Mokolo Prison in January 1997. Until 1997 no executions have taken place in Cameroon since 1988.
The last death sentence was in 2011.
On 21 November 2012, the government funded National Commission on Human Rights and Freedoms released a report in which it called for the abolition of the death penalty.

The war on terror
In December 2014, President Paul Biya promulgated the new anti-terrorism law, which provides for the death penalty for the perpetrators of terrorism acts. The law specifies that terrorist crimes are the taking of action likely to cause death; to endanger or damage the physical integrity of an-other; or to do damage to the nation’s natural resources, environment, or cultural heritage. Even those who finance terrorism, engage in money laundering, recruit in the name of terrorism or ac-claim terrorist activities will face the death penalty. The new anti-terrorism law was criticised by the opposition, civil society groupings and human rights organisations as severely curtailing basic freedoms.
In 2016, miitray courts in the northern city of Maroua issued 160 death sentences according to Amnesty International. Some have been commuted in appeal.
Of about 800 persons held in Cameroon on suspicion of links to Boko Haram, 109 have been sentenced to death and awaiting execution. This was disclosed by Cameroonian investigative journalist, Chief Bisong Etahoben via Twitter on 25 August 2016.
No death sentence was recorded in 2017. However, on 12 October 2017, a group of lawyers against the death penalty in Cameroon said,  through Agence Press Africa, that the detainees sentenced to death are about 235. More precisely, 21 are in the prison of Bafoussam, 22 in that of Yaoundé-Kodengui, while 3 are in the prison of New-Bell in Douala. It is however in the northern part of the country that there is the largest number of 189 condemned to death by military jurisdictions. It is mostly about people related to the Nigerian terrorist group Boko Haram.


The death penalty on women
Under Section 22(3) of the Penal Code, a pregnant woman can be executed only after she has given birth to herchild.  Additionally, Cameroon is party to the ICCPR,  which prohibits the execution of pregnant women and to the African Charter on the Rights and Welfare of the Child,  which prohibits the imposition of a death sentence on mothers of infants and young children.

United Nations
On 1 May 2013, Cameroon was reviewed under the Universal Periodic Review of the UN Human Rights Council. The Government rejected recommendations to establish an official moratorium on executions with a view to abolishing the death penalty on the grounds of its perceived deterrent nature, and because public opinion remains strongly in favour of capital punishment. Foreign Minister Pierre Moukoko Mbonjo said that Cameroon needs "more time" to make progress on the matter. The law is expression of the general will and the Government must take account of the electorate and the evolution of society... The death penalty is not applied de facto, and its abolition “will happen one day”, the Minister told States parties to the UN Human Rights Council.
On 16 December 2020, Cameroon abstained from the Resolution on a Moratorium on the Use of the Death Penalty at the UN General Assembly, as in the previous years. 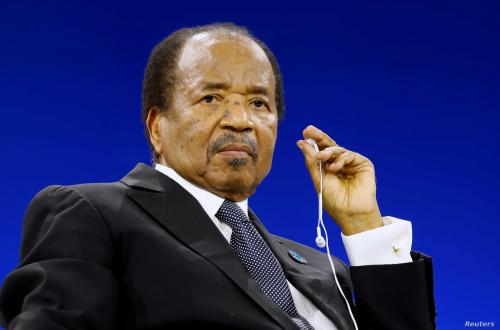 Cameroon's president has announced steps that will lead to the release of thousands of prisoners due to concerns about the coronavirus spreading in overcrowded facilities, VOA News reported on 16 April 2020.

Cameroon's president has announced steps that will lead to the release of thousands of prisoners due to concerns about the coronavirus spreading in overcrowded facilities, VOA News reported on 16 April 2020.
According to estimates, at least 10,000 prisoners can be released, a third of those held in correctional facilities built for just 9,000 inmates.
However, separatists fighting for an independent English-speaking state and officials jailed for corruption are excluded. Rights groups also note that Biya's political opponents and journalists critical of his rule will remain behind bars.
Since 15 April, Cameroon state radio has read out an order signed by President Paul Biya to decrease crowding in the central African state’s 78 prisons.
"The president of the republic hereby decrees as follows. Article 1. Persons whose sentences have become final as at the date of signature of this decree shall benefit from remissions as follows. One. Commutation of the death sentence to life imprisonment in favor of persons initially sentenced to death."
Under the presidential decision, life sentences are reduced to 25 years, those for whom life sentences had already been reduced to 25 years will have five years taken off their sentences. Ten-year sentences will be cut by three years, five-year sentences will be cut by two years, and three-year sentences will be cut by one year.
Lawyer Luc Kisob who argues the government’s position in corruption and terrorism cases, said not everyone will benefit from the initiative, although Biya has the constitutional power to free whoever he wants.
"The constitution authorizes the head of state to commute and to remit sentences of convicts. The prerogative rests therefore on the head of state to choose who to pardon or who not to pardon, and in this case certain kinds of offenses have been excluded from those who shall benefit from the measure, like offenses of terrorism, misappropriation of public property, tax fraud, customs fraud, sexual offenses or offenses which touch on the security of the state," said the lawyer.
Others excluded from the order are political prisoners such as Mamadou Mota, vice president of the opposition Cameroon Renaissance Movement Party, who was arrested while protesting the results of the October 2018 presidential election, and separatists fighting for the independence of the English-speaking minority in the majority French-speaking country.
Rights activist Njugoy Ardo of the Cameroon Center for Democracy and Governance said by messaging app that the 86-year-old Biya has missed an opportunity to make peace with his people.
He said Biya, by not pardoning political prisoners and separatist leaders who realize the coronavirus is bringing people together against a common enemy in COVID-19, has missed an opportunity to reconcile with the people he has ruled with an iron fist for close to 40 years. He said Biya still can make history by ordering the release of people he has declared his enemies just because they do not agree with him remaining in power.
Others who will not benefit from the order are Biya’s former prime minister Ephraim Inoni, ex-minister of finance Abah Abah Polycarp, and Jean Mariie Atangana Mebara, a former minister of higher education.
Some have been jailed for more than a decade. Biya ordered their arrest saying that they plundered state resources, but their lawyers say they are being punished because they advised Biya to step down as president.
The presidential decree does not specify how many people will benefit from the order. The Justice Ministry is now examining prisoners’ files.
However, Ardo and Kisob said at least 10,000 prisoners may be freed. Cameroon currently has 30,000 prisoners in detention facilities constructed for barely 9,000.