GENERAL MOTION OF THE VIII CONGRESS OF HANDS OFF CAIN 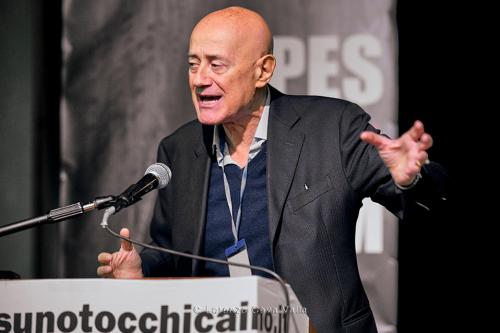 The VIII Congress of Hands Off Cain, held at the Opera Correctional Facility (Milan) on the 20th and 21st of December,

Aware that, in the name of the intangibility of human dignity, Hands Off Cain successfully carried out the campaign for the moratorium on capital punishment at the General Assembly of the United Nations, assigning a principal role to the Italian State, also considers it increasingly urgent and necessary to expand its mission, starting in Italy, not only to the elimination of the death penalty but also of life imprisonment and all forms of degrading punishment, equivalent or worse, substantially, to death itself as punishment.

Affectionately recalling and recognising the grand efforts of Marco Pannella, in particular, his Spes Contra Spem which was launched right in the Opera Correctional Facility during the congress four years ago which inspired, guided and nourished the campaign against the “endless punishment”; thanking - on behalf of all - the inmates condemned to life imprisonment who were the stars of the documentary film by  Ambrogio Crespi Spes Contra Spem - Liberi Dentro who, against all hope, were hope itself, influencing, with their own transformations, the orientations of the highest-standing judges in Italy and Europe.

Honouring, with great satisfaction, the sentence of the European Court of Human Rights, coming into effect definitively on 8 October 2019, in the case of  Marcello Viola Versus Italy, championed by legal counsellor Antonella Mascia and sustained, among the other third party interventions, by the academics and experts coordinated by Prof. Davide Galliani of the Università degli Studi of Milan and by Prof. Andrea Pugiotto of the University of Ferrara. The decision of the Court of Strasbourg is a milestone on the road to abolishing the endless punishment, with which Italy affirms, along with Europe, that the right to hope is a fundamental human right, up to now denied by life imprisonment without the chance of parole, considered by the Court a “structural” problem, being that approximately 1200 inmates out of the 1700 Italian inmates serving life sentences are subject to this brand of endless punishment.

Furthermore, honouring, with great satisfaction, Sentence N. 253 of 23 October 2019 of the Constitutional Court of Italy which further breached the system of endless punishment and the  entire reasoning behind sentences without the chance of reprieve, deeming such attitudes as unconstitutional, at the moment in specific circumstances - though such changes are bound to be determinant as regards others within the penitentiary system according to progressive logic applied to sentencing - the absolute presumption of social malevolence regarding the treatment of inmates under Article 4 Bis of the correctional system. The decision of the Constitutional Court is a first step towards the codification, also in Italy, of the right to hope as affirmed numerous times by the jurisprudence of the EDU Court and infringes on the totem of collaboration with justice as the only criteria for reform, breaking with the criminal logic of the past and embraces changes by inmates serving time for organised crime. With this sentence, hope prevailed over fear, the Rule of Law was victorious over the Rule of the State which, for too many years, for the sake of urgency, undermined constitutional principals.

Calls upon directional organs to follow through in the battle against the death penalty in the world and intensify actions of promotion and pressure, starting with Africa, aimed at garnering further supporters for a new pro-moratorium Resolution in view of the General Assembly of 2020.

Calls upon directional organs to conduct monitoring of the execution of the sentence Viola Versus Italy, communicating the results to the Committee of Ministers of the European Council and to continue supporting the collective action of the 252 prisoners serving life sentences without the chance of parole who, thanks to legal counsellor Andrea Saccucci, were received in Genevra by the United Nations Committee on Human Rights, evaluating the possibility of appealing to other seats of justice on both the national and international level.

Calls upon directional organs to continue in the fight against life imprisonment, especially that without the chance of parole, examining questions regarding the flimsy constitutionality of the ratio decidendi of Sentence N. 253/19.

Calls upon directional organs to undertake initiatives of sensitisation of public opinion, as well as appealing to high national and international courts, seeking to move beyond the emergency-based reasoning behind special norms and institutions, such as those governing informational transparency and anti-mafia laws in particular, as well as the procedures of disbanding communities under the grips of the mafia without destroying people’s lives; combatting the mafia without undermining the principals of the Rule of Law and fundamental human rights.

Calls upon directional organs to undertake all initiatives aimed at abolishing “personal security measures” for guilty subjects, such as was called for by the Penal Code Reform created by the Grosso, Nordio and Pisapia Commission. This commitment should be particularly directed at “personal detention security measures” in the so-called “work houses” and “agricultural colonies”, which, according to appeals to the Constitutional Court and the EDU Court, were deemed violations of principals regarding the safeguard of Human Rights and Fundamental Liberties. The seven detention centres with personal security measures under 41-Bis are emblematic of the violation of the right protecting against “double jeopardy”, being tried or punished twice for the same offence.

Calls upon directional organs to undertake all initiatives aimed at abolishing solitary confinement, starting with 41-Bis and daily solitary confinement, considering the available literature, especially regarding long-term exposure to such treatment, which places such actions in direct contrast to laws outlawing torture and cruel and unusual punishment. The General Assembly itself, in the Mandela Rules of 2015, ruled that solitary confinement, for an undetermined time or at length, such as any period beyond 15 days, should be prohibited. It also clearly defined, for the first time, solitary confinement as “the reclusion of an inmate for 22 or more hours a day without significant human contact”, reaffirming the principal that “solitary confinement must not be imposed in sentencing”.  As established by the CPT in its 21st Annual Report of 2011, solitary confinement “must not be part of the canon of penal sanctions.”

Calls upon the directional organs to undertake initiatives aimed at, after the death penalty and life imprisonment without parole, cruel punishments conceived on the basis of the absurd conviction that punishment must, necessarily, correspond to the cruelty and violence of the acts perpetrated to warrant punishment, those inflicted by justice and the punishments of criminal law and its harshest tool, prison, a structure founded on torture and hardship, of affliction and inhuman and degrading treatment, and, rather, seeking the alternative, as Aldo Moro said, “Not so much a better penal code, but something better from the penal code”, not alternative punishments, but alternatives to punishment itself, such as - some are already occurring, and are worthy of reinforcing - practices of reconciliation and reparation, volunteer works for the public good, as well as every form of inclusion and reintegration into society.