HANDS OFF CAIN'S APPEAL FOR THE RELEASE OF NARGES MOHAMMADI 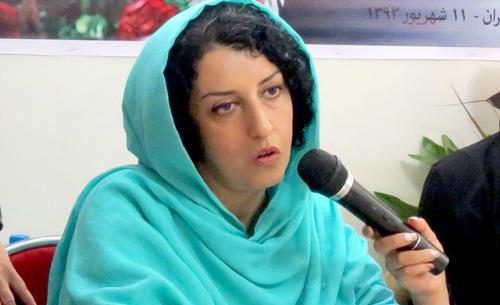 To the President of the (Islamic) Republic of Iran Hassan Rouhani

Hands Off Cain appeals to You, President Hassan Rouhani, to ask for the immediate liberation of the lawyer and human rights defender Narges Mohammadi, as well as to all persons detained in Iran for their commitment to the defense and exercise of human rights as universally recognized.
Hands Off Cain is the association that has promoted together with the Nonviolent Radical Party Transnational and Transparty, always in dialogue with the Italian Government, the campaign that led the General Assembly of the United Nations to declare a universal moratorium on capital punishment.
We are shocked by the fact that an important human rights activist involved in the fight against the death penalty as Narges Mohammadi was sentenced to serve 10 years in prison because of her human and civil commitment.
We know that she has already been detained for her legal activity and for her activism in defense of human rights.
We understand that she has been convicted on charges of planning crimes against Iran's security, propaganda against the government, and allegedly has promoted an illegal political group, which would be the association against the death penalty "Step by step against the death penalty ".
We know that Ms. Narges Mohammadi, former collaborator of the Nobel Peace Prize winner Shirin Ebadi, won the Alexander Langer Award in 2009 for her commitment to protect human rights, in particular addressed to the abolition of the death penalty against Iranian minors.
This year, the city of Paris has conferred an award for her peaceful activism.
In Your country, in Iran, Mohammadi Nages, following a previous arrest in 2010, was subjected to isolation during which she developed a disease that causes temporary moments of loss of control over muscles.
Ms. Mohammadi, who had already been sentenced to six years in prison in 2011, on 19 May 2016 had the prison term extended for four more years.
She had been released on bail ($ 200,000) in 2013 for health reasons but after the meeting in Tehran in March 2014, with the then head of European foreign policy Catherine Ashton to discuss the issue of human rights in Iran, she has suffered increasing pressure, culminated in a re-arrest in May 2015.
We know that in June she has brought forth a long and hard hunger strike asking to be granted the right to speak by phone with her twin sons, nine years old, living in Paris, whom she heard the last time in May 2015
Ms. Mohammadi is held in Evin prison where, as documented in a recent report of "International Campaign for Human Rights in Iran", to political prisoners are routinely denied medical care and hospitalization, are severely limited visitation rights, with the lack of regular contact telephone with families, and nutrition is poor and inadequate.
The General Assembly resolution of the United Nations has asked with overwhelming majority, and several times, to all States that still practice the death penalty, to establish a moratorium on executions with a view to its abolition, believing that it would contribute to the respect of human dignity and the strengthening and the progressive development of human rights.
We consider it unacceptable that Iran, that already hold the world record for the number of executions compared to the population, even comes to haunt in so violent forms those who work for the defense of those sentenced to death.
We believe that when you decide to start a political dialogue with a country like ours, Italy, you can’t rely only on business and trade. The human rights dimension can not and should not be missed, and for this reason we ask you, President Rouhani, for the responsibility and the power that You hold, to make every effort for the liberation of Nages Mohammadi, and to ensure that in Iran, human and civil rights, as recognized in international law, are not trampled.


To support the appeal you can send an email to info@nessunotocchicaino.it